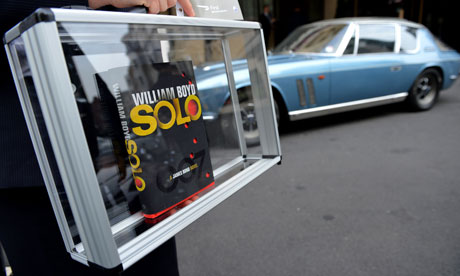 William Boyd is a brave soul,but kudos on his confidence in writing a James Bond that defies Hollywood’s iconic figure, returning to Ian Flemming‘s imagined figure.

William Boyd was born in Accra,Ghana, but is considered an award-winning British writer. His childhood probably accounts for the subtle insightful contextualizations he makes in his books,laden with the burden of awareness regarding socioeconomic and political issues in African countries.

“Solo” is Boyd’s latest offering to the world, authorized by Ian Flemming’s estate, it is part of the installment of the James Bond franchise. The Bond in William Boyd’s “Solo” moves away from the blatant brute stature of danger and chiseled ‘he-man’ perfection that has governed the movie adaptation of this franchise. This Bond is epitomized by Daniel Day-Lewis. This affords audiences the opportunity to envision a svelte man, with the skills and persona that comes with being 007 not masking the humanizing flaws that provides the character memorable depth. I see a spy who has the abilities to command a room with his presence, as is customary of Bond,but can blend as a no one, something the movie versions cannot. George Lazenby, Timothy Dalton, Sean Connery,Daniel Craig etc. were too striking a figures. “Solo” is given a British-to-West African countries-to-America 60s/70s context. James bond is 45 years old and, like Daniel Craig in Skyfall, is deeply weary from the perils that come with ageing, but resigned to continue doing his duty to the crown. However, Bond is on a lone mission. William Boyd articulates the crevices of Flemming’s archetypal Bond that makes and breaks apart Bond, from the gorgeous woman, to refined tastes in apparel, and the vices of man – well-aged whisky’s and cigarettes. Boyd said that “Bond is a sensualist.”

Something I found interesting was that “Solo” was launched on Wednesday at the Dorchester Hotel in London. As a car lover I was happy to see the vintage sports cars (Jensen of course), with flight attendants lined up near them. There were 7 copies of the book driven to Heathrow Airport with prime destinations that were tied to the Bond franchise, or to Boyd. These cities were Cape Town (I know,I fangirled hard), Edinburgh,Amsterdam, Sydney, Zurich, New Dheli and Los Angeles.

The lucky folks in Britain, USA and Canada have already got their books. Here’s to hoping more copies are flown to Cape Town.

I’m dying to read this.