Following London Fashion Week, and the scrumptious food consumed during said week, I turned full-on tourist. I gave up the stiletto heels for functional shoes, big coats and scarves.

One thing I can say about world travel is that once you know what vibe you’re into, you’ll find a mellow way of getting to it in any town or city. London, while rife with contemporary pop culture energy, is a city defined by being historical. It does not have the earthy pseudo-religious tradition of a people, and places,whose essence and chronology is tied to nature, deities, magic and mythos. What it has is a heady hand in the molding of western culture. It has been the base of one of thee most incredible geopolitical military powers in human history. It has been the continental cross-road of language creators and speakers, slavers and those enslaved by more than cruel men, the rich, the poor, the lost, dreamers, vagrants, saints and sinners.

I used to read about the twisted vines of mapped cobbled roads that lead to tiny gardens and houses of parliament. I read of the bleeding and mangled bodies of Jack the Ripper’s victims found in the streets of London, or near the river Thames. I’ve read fanciful tales of vampires that meet to indulge in decadent debauchery in London’s most exclusive back door haunts. I’ve seen paintings of the outskirts of London where misty depressing moors stretch out to the dusky horizon. I’ve seen films recreate the many centuries and historical events that have made an impact in the continuity of human existence – all tied to London.

Since I was an adept hand at the public transport system, I took a bus ride to get to Buckingham, and was told by the attendant the last stop for my bus was Trafalgar Square. I located an Information office in the area, proceeded to get my bearings as I threw question after question at the Information officer about every landmark and tourist spot in London, and finally went on my way. I decided to walk. Trust me, its part of the tourist experience, makes it much more flexible to maneuver directions and is a gift to you when you discover some amazing nestled wonders while pounding pavement. I walked from Trafalgar to Buckingham – through various parks and regally named streets and pathways.

I was in my Trenery leopard pumps when I stepped on the Jubilee Walkway, looked up at Buckingham

Don’t get me wrong, its got an overwhelming untouchable gated vibe which speaks to the fact that it is the residence of royalty. But unlike the drawings, paintings, long-winded words in old books etc. It did not inspire the same reverence I’d had having never seen it. I guess, in part, it was due to the presence of us tourists. We take away from its ‘shine’ and leave a grey curious spectacle to be seen. I’m also super peeved I didn’t get to tease a Palace guard like I’d planned.

Following that experience I walked through to the gold statue Victoria fountain, snapped some pictures, passed various royal properties and monuments to arrive at The National Gallery.

The National Gallery was everything I’d hoped. The paintings,drawings and mosaics I had only before studied in high school textbooks, were in front of me. In dried up, cracking paint and smudged coal and pencil was life. It was the past, present and future etched on canvas for billions to see through the eyes of the artists and through to their makers. From seeing Da Vinci’s work to Van Gogh, and Tintoretto I witnessed the famed hopes and despair of generations, I saw architecture, food, clothing, humanity, evolution, religion and even nautical talent being celebrated.

I didn’t get a chance to re-create the Bond/Q scene from the film ‘James Bond: Skyfall’ though, and that irked me a lot.

Have you guys ever seen the view of Trafalgar Square? I can barely describe it. You’d have to witness it yourself to understand.

Anyway, while standing trying to digest what I’d experienced at the gallery I saw a familiar piece of home – a building with Suid Afrika carved above the high pillars. I saw my flag and a poster advertising South Africa, and understood it to likely be an embassy or tourism office. Felt good to spot a little of home there. 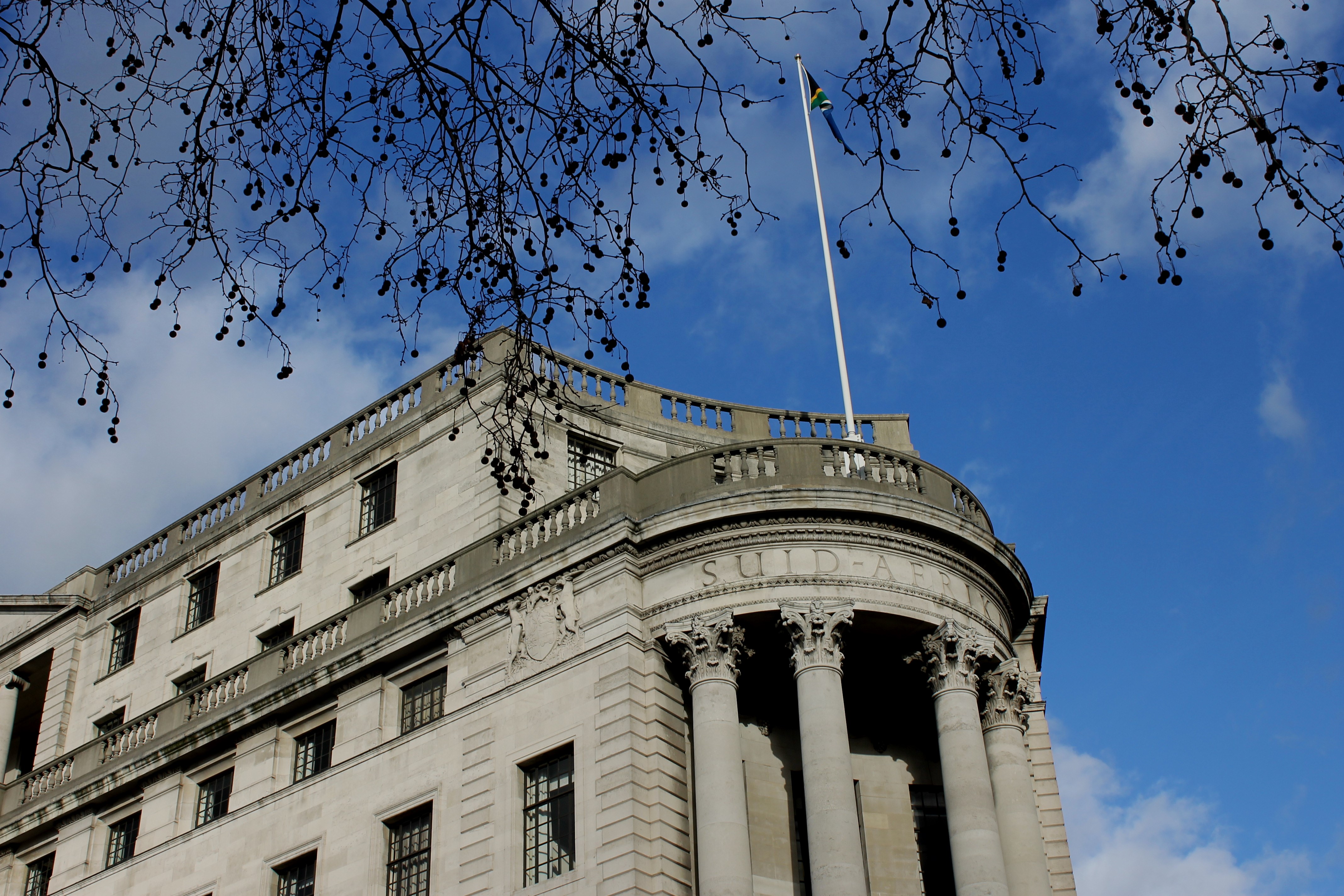 After that I looked up trying to find my next target – Big Ben. I literally just started walking straight towards it. Along the way I found a Sherlock Holmes pub with its front glass sandblasted with Sir Arthur Conan Doyle and Sherlock Holmes’s iconic portraits.
Obligated selfie was necessary.

Also got to see the theater known as The Playhouse, and while walking I got thee most incredible picture of the London Eye. 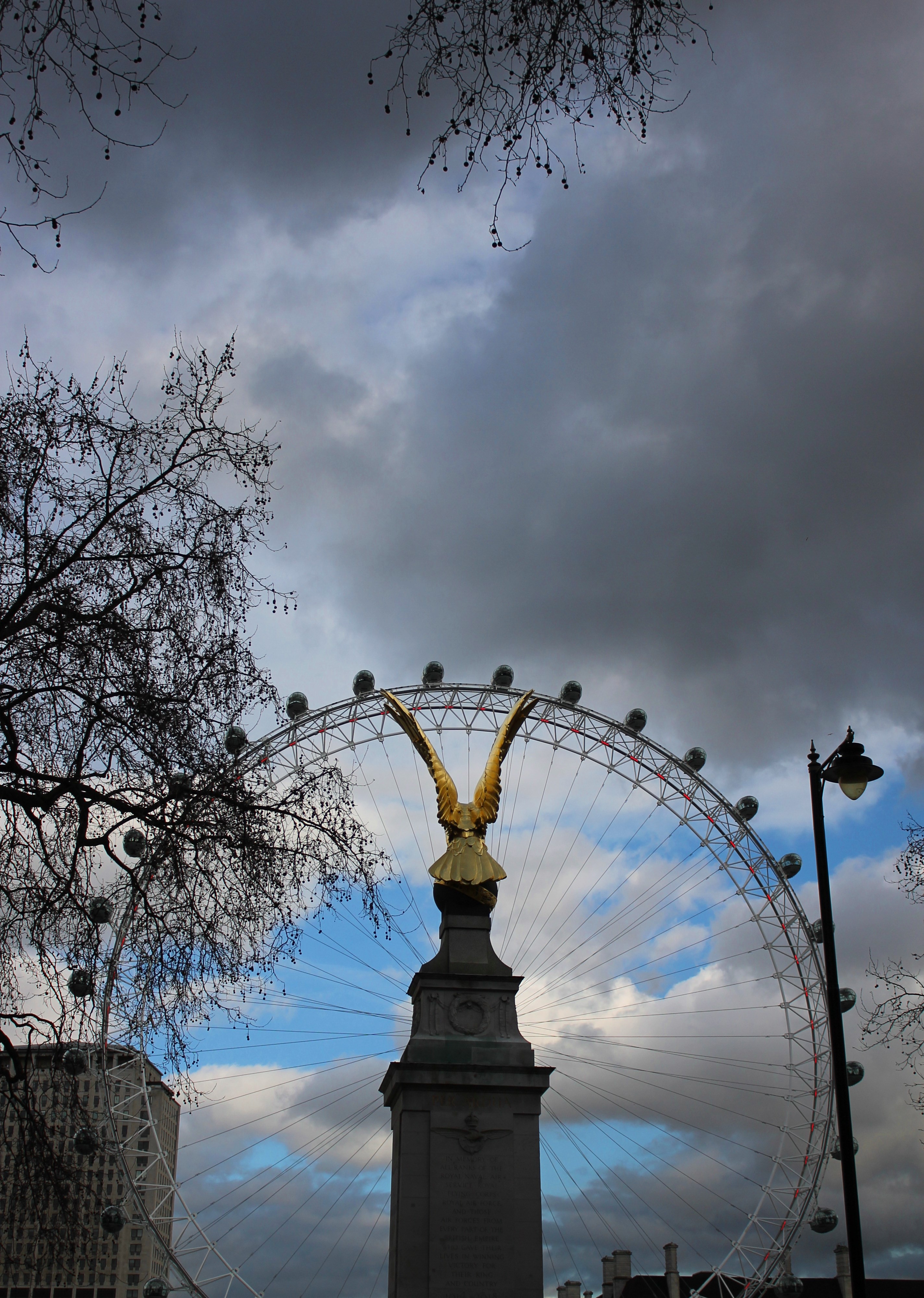 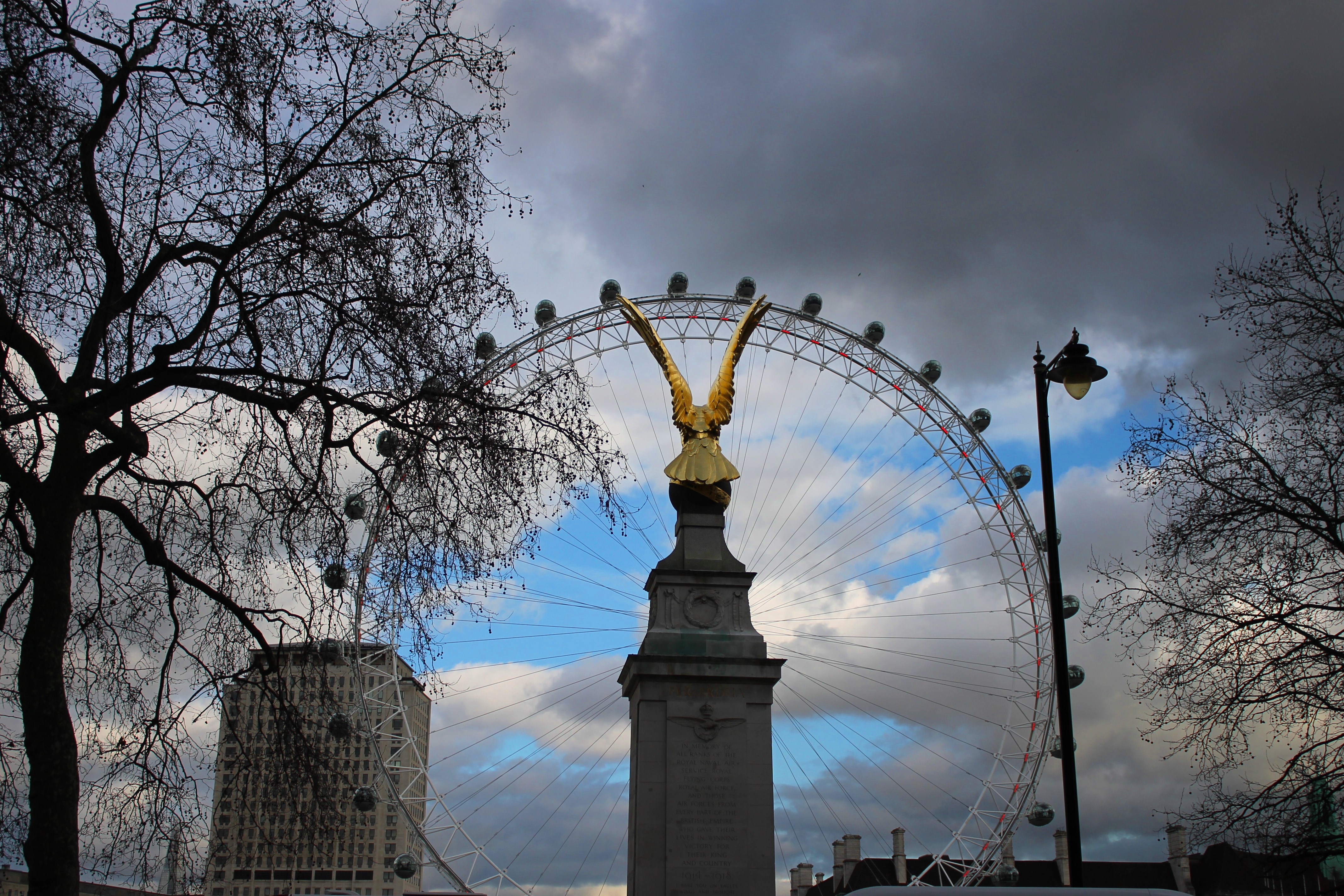 I arrived into the vicinity of Big Ben with a hectic amount of human and vehicle traffic. I saw Big Ben and the House of Parliament up close. That piece of architecture gave me little butterflies in my tummy. It was just purely awesome. It turns out that I’d arrived right before a political debate would commence, and outside the building political commentators, general media and reporters in the midsts of interviewing, were all queued up to enter the chambers. Intriguing that the people lined outside preparing to strike against certain political figures within had less of the vibrant vehemence South African people have when striking.

The next day I took several trains to reach my destination – Abbey Road Studios. Anyone familiar with The Beatles, or general Brit pop culture would know its significance. I spent 10minutes there poking about (with permission within reason).
I then went outside in the rain and re-enacted The Beatles album cover taken on Abbey Road. The inhabitants driving by actually understood, and with sardonic smiles let us tourists do our thing for a while.

One train ride later I bought an umbrella and walked myself to the 2nd place I’d been most eager to visit since landing in Britain – 221b Baker Street. Yes, building owned by one Mrs Hudson and the home of one Sherlock Holmes and John Watson. It brought my eager beaver fangirl out and I shivered at being in a place where one of my all-time favorite novel-to-television characters had been written to exist.

I made sure to leave with a business card in case I was ever in the need of the Consulting Detectives skills.

I got to see the BBC headquarters – the juggernaut that had birthed so many of my favorite television shows.

I didn’t care how much it would cost, nor the health issues I’d incur walking through the rain and waiting hours in queues – the number 1 place to visit while in London, for me, was Platform 9 3/4. If you read my letter to J.K Rowling you’ll understand the prolific role Harry Potter books have played in my life. Being in any place in London that celebrates, profits or further delves into the realm of that book franchise’s world is a dream come true.
I got to see the wands of each character, and I found my wand to be The Elder Wand (because only a person as wicked as I is deserving of wielding that wand without repercussions). I saw all the Harry Potter memorabilia – Rowena Ravenclaw’s diadem, the golden egg from Goblet of fire, and Tom Marvolo Riddle’s diary (sans Basilisk fang- which leaves me worried). I donned my Slytherin scarf, grabbed my wand, my cases and my owl (named Nymeria) and sped across through the wall at Platform 9 3/4.

The James Bond ‘Bond in Motion’ Museum I went to after, was a nice way of rounding things up though. 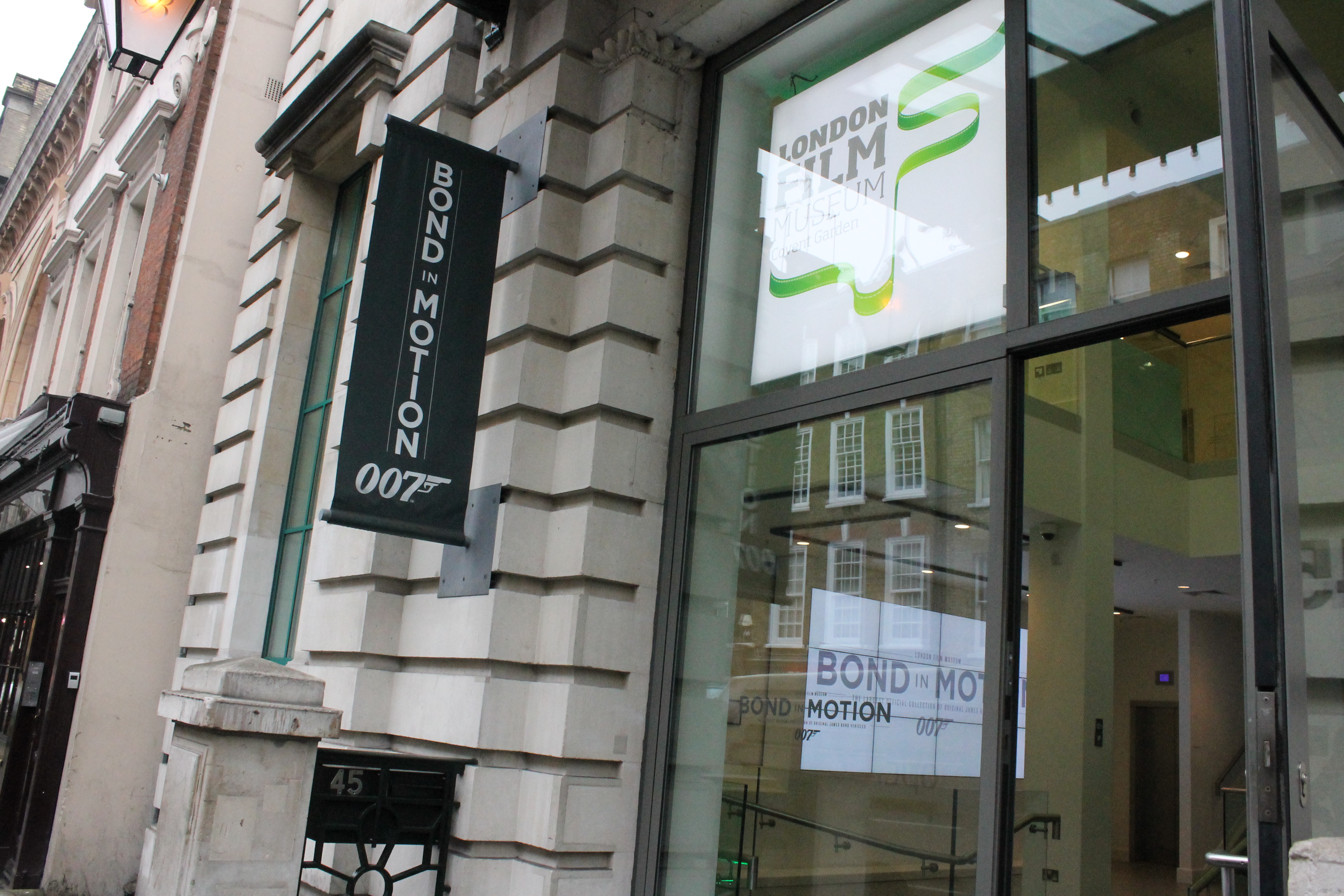 Funny story though: The place I’d booked at forgot I’d wanted to book for a last night. Scary thought not knowing where you’re gonna crash right?
Not!
I spent the last day browsing designer pop-ups at London Fashion Weekend, and went to Starbucks and spent hours blogging and social networking after. Then I simply got an Uber London cab(which is just a sublimely efficient service) to the nearest train station and had a comfortable trip to Heathrow in a near empty train, in the dead of night, without fear that I’d be attacked or something.
I chilled at Heathrow for a couple of hours, got a refund on the remaining cash on my Oyster Card(I still think the public transport system structure there is amazing), and used up my 4 hours of free Wi-fi at the airport Skyping with mom, and Instagram’ed how comfy I was reclining in an airport cafe couch while waiting for my departure time.

Shout-out to the Etihad Airline. I had a really surprisingly comfortable first trip abroad, and look forward to any that follow. Their personnel’s uniforms are so chic guys, and they kept them pristine for hours on end. We had a medical emergency on the flight and the personnel handled it so well. Kudos!

The man at the Immigration desk when I first entered London Airport said in a mocking tone: “Oh! You only have £300 to spend? You know that won’t get you far in London right?”

I spent 10 Days in London with a trip budget of R20 000.00c and I enjoyed myself and survived. I did everything I wanted comfortably. I’d love to see if I could manage that in destinations across the globe.

Anyone wanna sponsor the challenge?

Let’s promote the notion that global travel isn’t an impossible feat for normal people with low budgets and big holiday dreams. It’s all about how you plan!