Be still my pop culture heart!

I’ve seen similar dance productions played through my TV screen in some of my favorite movies and television shows, and figured I’d get my chance to experience the spectacles once I’d touched down in New York, and experienced the marvels of Broadway like a true tourist.

The first and last stage production I had experienced was Lord of the Dance way back in Bloemfontein in 2004, when I was too young to appreciate the incredible technique and timing of the dancers…but Burn the Floor left room for yearning to perhaps watch it once more…you know, for posterity sake.

If the character Cooper Nielson, in the film Center Stage, had a dance production company in this day and age, it would likely look a lot like Burn the Floor. Burn The Floor  is an incredibly energetic and colorful theatrical dance experience, which is world-renowned. The have choreography that’s entrancing, music that pays homage to some musical greats, and a cast that are ALL strangely attractive – Seriously! Whats up with that?

Before I rehash the entire show in mad detail, let me tell you about the yum wine & food tasting I got to experience before the main event at Baxter Theater in Cape Town, South Africa. Award-winning wine producer Fleur du Cap and Craig Cormack hosted a wine and salt combination tasting. It was a rather intimate and relaxed taste, tweet and eat situation populated with PR folk, lifestyle bloggers, theater enthusiasts, wine aficionados and more.

The sum total of my food commentary amounted to mutterings of: “That’s uuuuh…grapey?” for the Chenin Blanc, “grassy” or “woooo! that’s strong” for the reds, and “hmmmmm. that’s kinda nice” for my trusty favored wine Sauvignon Blanc – worst wine reviewer ever, right?!

I am told the Fleur du Cap wines are premium good stuff. With my gradually learning palate, I did taste some of the “regional greatness” greatness they boast about so vehemently. 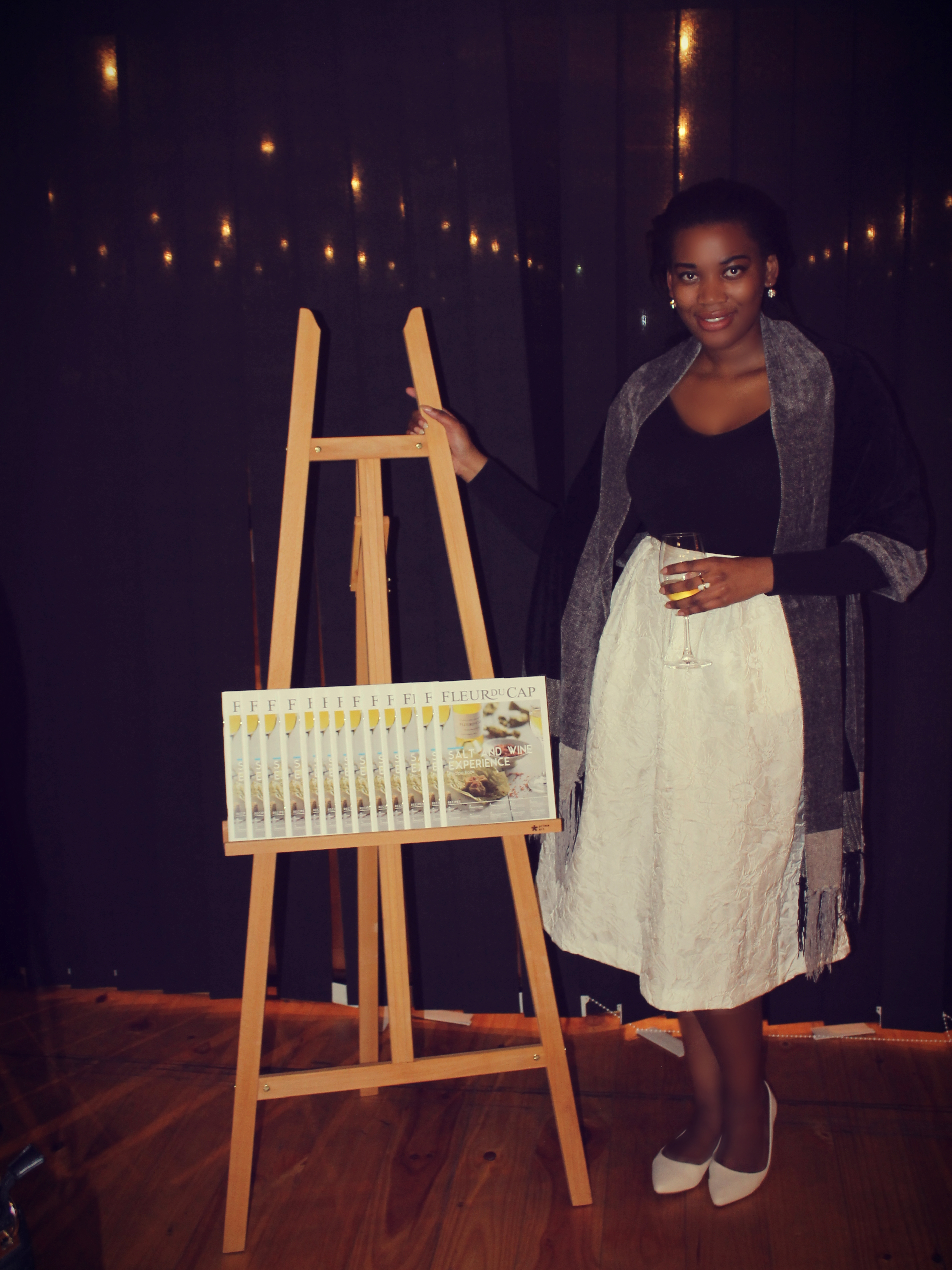 The audience was privy to wardrobe changes galore,  international dance sequences with exaggerated facial expressions, and brief plots – and the loud unique vocals of the productions two male and female singers belting out tunes by musicians like: world-renowned Grammy Award winning singers Christina Aguilera, Beyonce, and even some of my favorite tunes from films like Van Helsing and Burlesque.

I remember seeing the “Carmen” dance, and thanking television show Glee for having introduced me to what is apparently a known Broadway production set.

The two singers had a fierce vocal rivalry on stage, causing a vocal volume ruckus as they try to one-up each other. However, their rendition of Beyonce Knowles’s “Halo” presented an absolute duality of intense scene suspension amid the colorful moving vibrancy of the rest of the production. I could find imperfections in the female singer, Lelo’s vocal dexterity – but shame on anyone who finds fault in the bold mistakes of a performer who will one day hone her skill to formidable global acclaim. Also, I’m so deeply in like for the male singer Mike Introna, who gave me a youthful and modern reinterpretation of Elvis.

I may not know ballroom and ballet dance moves unless I’m in the throes of a So you think you can Dance? marathon, but my favorite dance style is the Paso Doble, and I commend the Burn The Floor cast for executing one of the most hypnotic Paso Doble sequences I’ve seen live. Anyone looking to the audience throughout the show would witness us nodding along to the instrumentals of songs by Santana, Led Zeppelin, The Rocky Horror Picture Show, Janis Joplin, and so many more songs straight out the 80s and 90s Greatest Hits albums.

Megan Wragg (who looked like celebrated Hollywood triple threat Julianne Hough while performing) and South Africa’s dancing star Johannes Radebe left my eyes burning as I held back a tear for their all-consuming “kissing you” dance.

If you get tired of body parts moving in near fluid synchronized perfection with occasional minuscule timing blunders, then focus on the costume design of this production because that’s what I did. Like, you guys should have seen some of those kick-ass black leather ensembles man – the men and woman looked like they belonged in Michael Jackson’s “Bad” video, or the catalog of next seasons Balmain editorial spread. I’m coveting everything black and gold this season folks!

Missing the Burn the Floor show wont kill you, but for anyone who is like me and adores pop culture, Burn the Floor is a must-watch to add to your collection of life experiences.