85-stores locally & internationally, make Rocomamas a new age gastronomy restaurant chain, whose reach extends because of its valuing of a fast-fine tasty experience.

Enter any Rocomamas restaurant, and you’ll be welcomed with an orange, white & black color scheme, which saturates the tile and metalwork interior design, of their ofttimes expansive dining space.

Where any other Spur Corporation property bears familiar kitsch motifs, such as Hussar Grill‘s New York bistro-style or Spur‘s appropriation of Native American stereotypes, Rocomamas decides to er on the side of modern Millennial exuberance.

It’s an excited urban space, that feels like jumping into an event activation poster – made: to grab your attention, peak your interest, open your wallet, and leave an impression that’ll always be at the forefront of hungry hoards minds.

I order from, and visit, the Cape Town Rocomamas Harrington Street, regularly.

I adore the Chicken Caesar Salad when made with just that little bit of extra cheese. However, when heading there in the early breath of Winter, I realized there is a whole host of Specials and experiences afforded to Rocomamas customers, should they decide to bravely venture out this chilly season.

…but more on the food, right?!

ICYMI: Rocomamas is a restaurant that offers up a Halaal Menu too!

If you aren’t feeling hectic hunger pangs when visiting a Rocomamas, then why not forgo delectable Ribs and Loaded Fries or exotic Nachos, for 6 bombs exploding ones tastebuds towards contentment.

Choose from pop-like balls stuffed with Jalapeno, Mac & Cheese, or even a Mixed bomb surprise.

Dip your bombs in dips like the Smoked Mayo, Shackster Sauce, or even some ridiculously yummy Baconaise!

I am not exaggerating when I say the Rocomamas ‘Rockstar’ Burger, for R69.00c , is the greatest burger I have ever bit into MY GOODNESS! 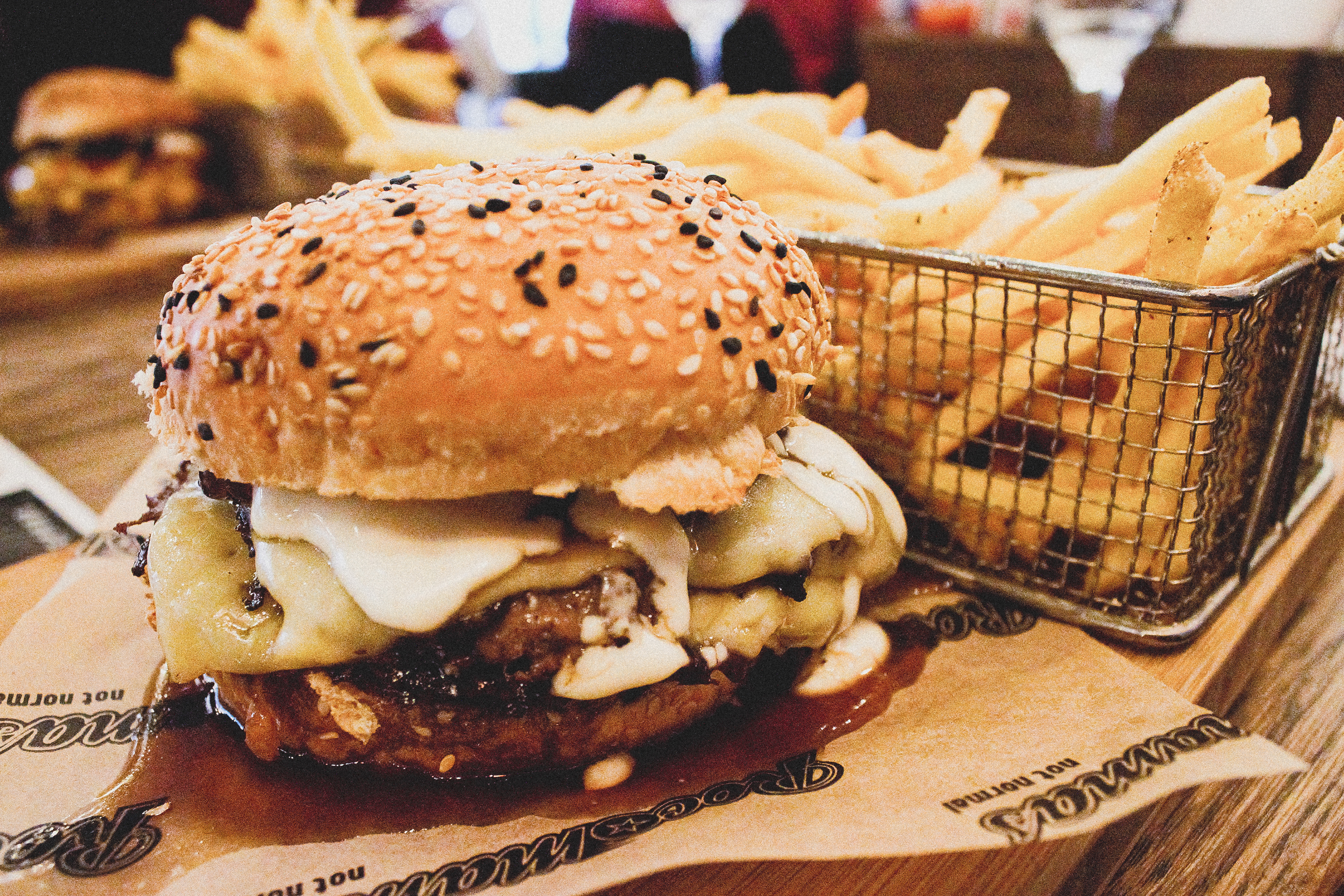 This burger alone, is: 150g of Smash Beef burger, a little RocoMayo secret recipe, Emmenthal Cheese – which I’d never encountered before – and the ingredient to bind the flavors in a beautiful symphony of boisterous flavors: Caramelised Red Onions.

Rocomamas Burgers are notorious. They have been known to recieve incredibly positive feedback on TripAdvisor, and lay claim to having thee most Instagrammed burger in South Africa.

If you’re smart enough to treat yourself to a Rocomamas meal, order their limited edition Smash Burger(its made with an innovative BLACK hamburger roll), or just build your own quality burger, with an extravaganza of ingredients, like: Jalapeno bombs, smash brew battered onion rings, Frankenweener, or even some spicy coleslaw. 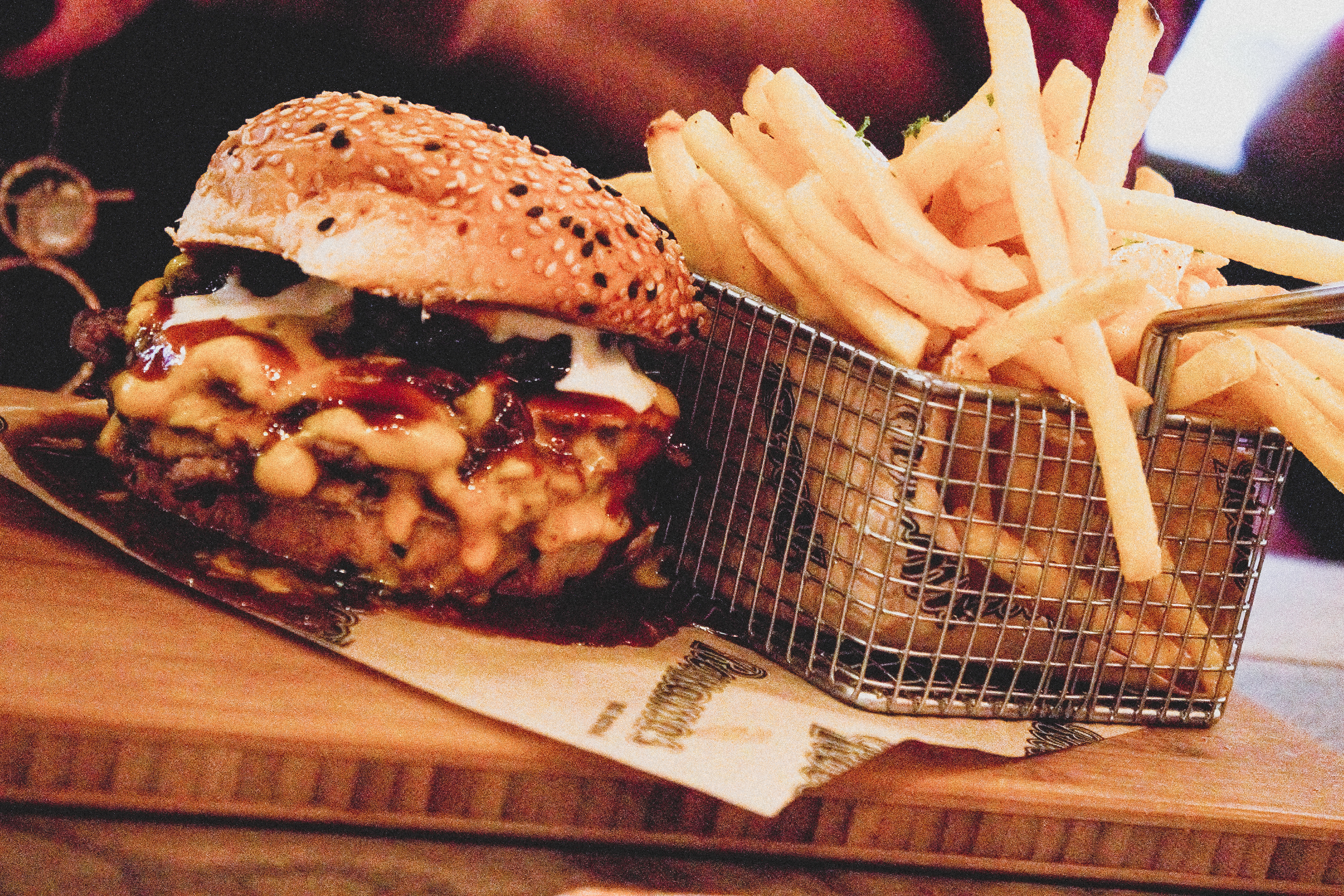 The burgers at Rocomamas, may be all the rage, but their Desserts & Milkshakes are the sweet Instagram moment you deserve.

Rocomamas Harrington has indoor heating, so you don’t have to feel trepidation ordering ice-cream filled treats, like my favored decadence: R37.00c (half) Nutella Waffles. 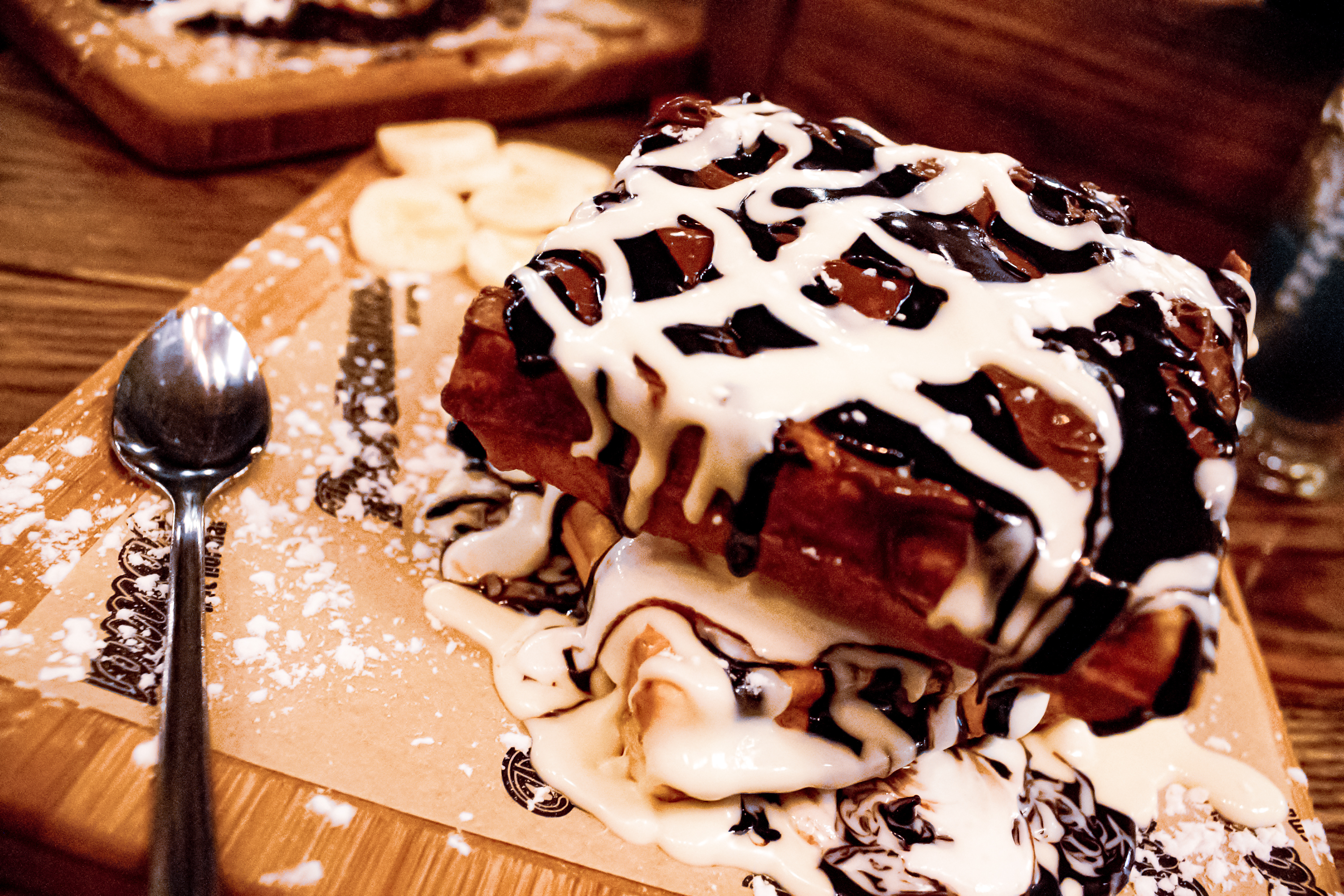 If you favor a more cookie-cutter dessert, try their Cookies & Scream Waffles, laden with Oreos, waffle, ice cream and chocolate. 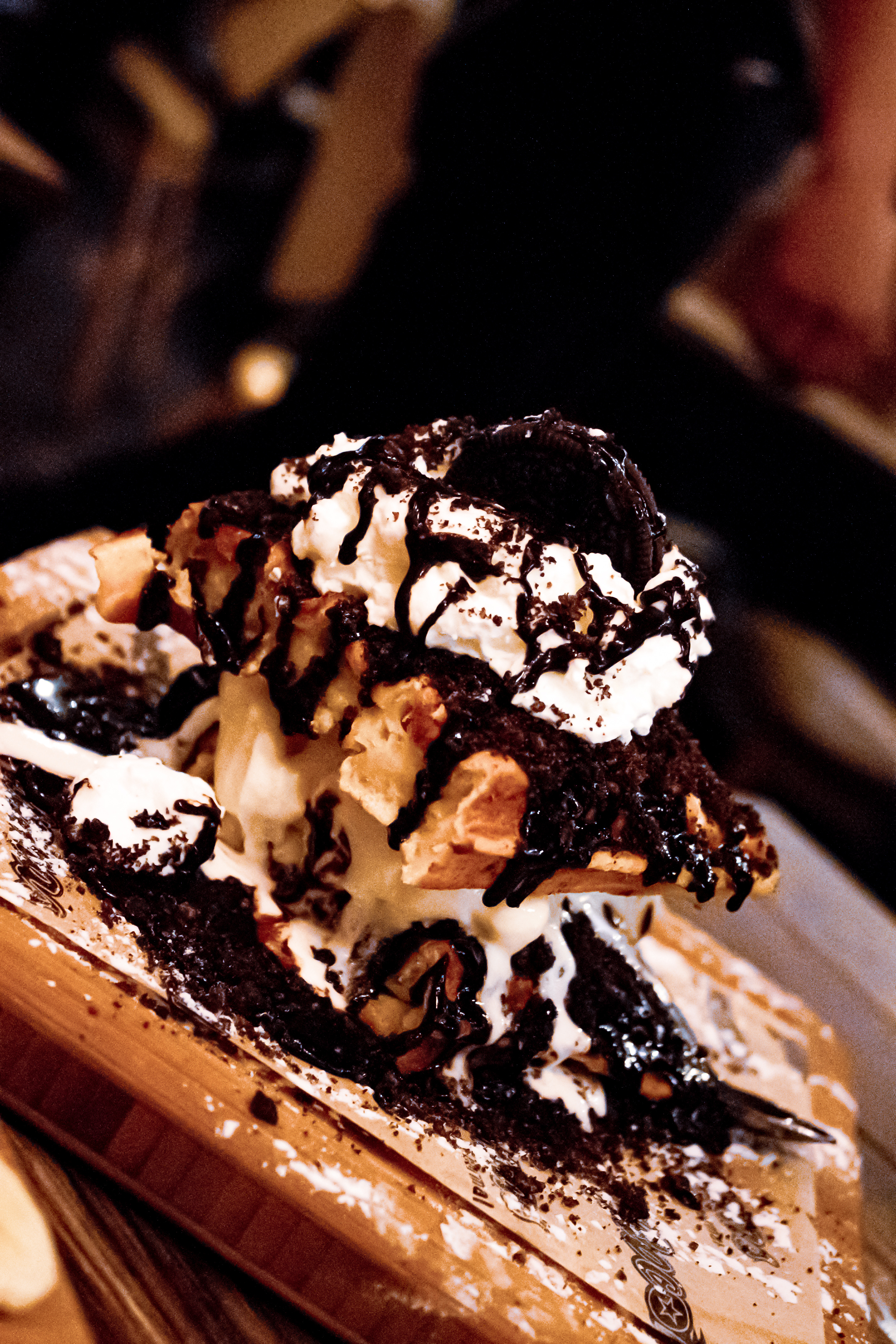 Rocomamas rockstar visitors can go a little more liquidy with their desserts too, choosing from options like the Slow Death by Chocolate or Cherry Cola shakes.

Did you know that Rocomamas have drink specials, like 2-for-1 on specific days? 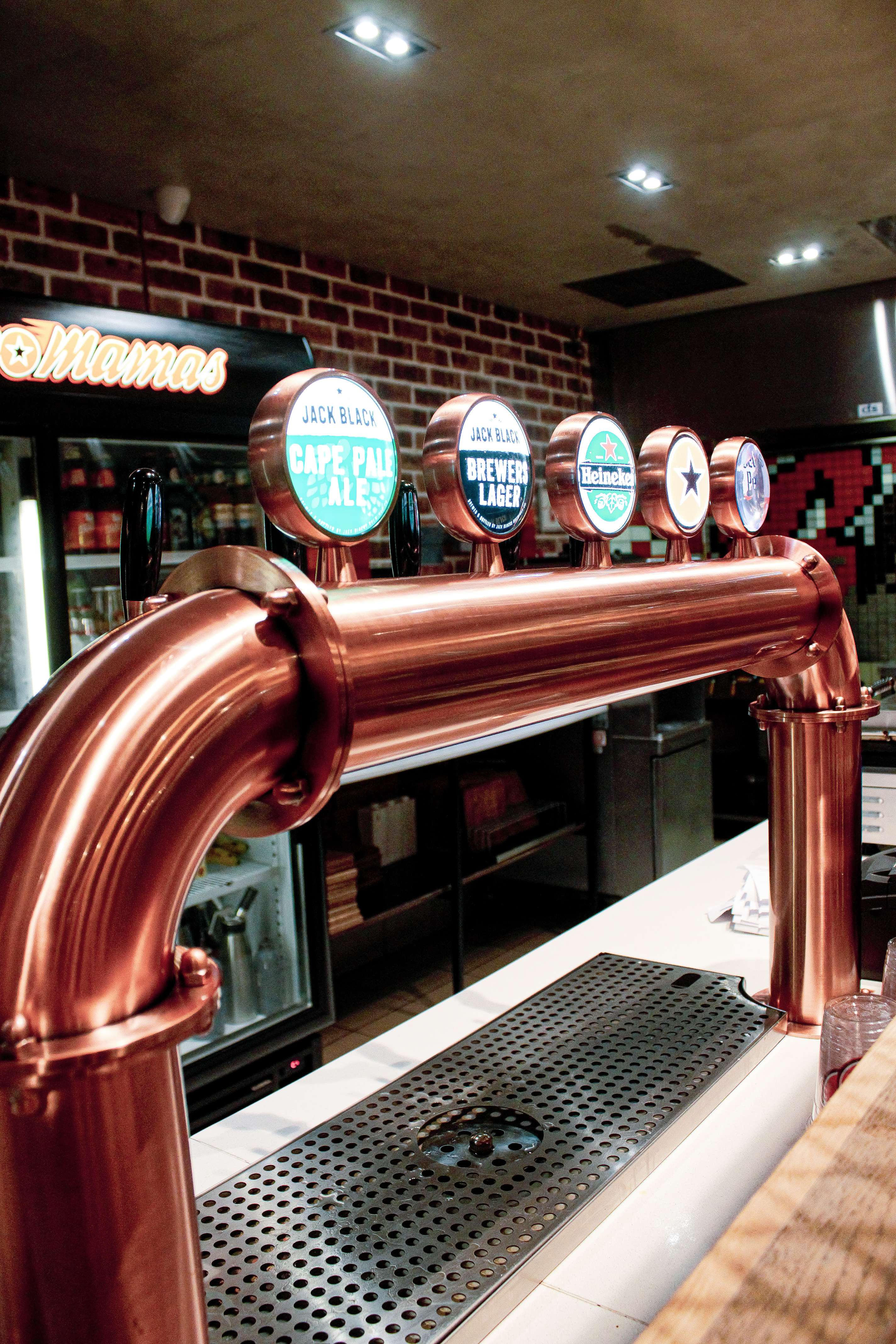 Besides their love of local craft brews, and universal classics like Savannah & Budweiser, Rocomamas stocks drinks for those not of the beer or cider persuasion.

You can enjoy Sundowner cocktails, spirits galore, and an affordable glass of wine.

Bring you family and friends, and you could order soft drinks too.

Need to have a semi-formal meeting? Rocomamas has a coffee and snack selection, very few cant help but nibble happily on.

Rocomamas also have a Halaal Drinks Menu, accommodating of the worlds large number of Muslims.

It’s actually a pretty cool place for a solo visit.

I can easily catch up on work while people move about the restaurant. The seating and ordering process, is simple enough, while the selection and taste of the food leaves nearly every single visitor returning.

I’m super keen for what Rocomamas Harrington, has in store for their Winter visitors.

Come around there weekdays or weekends, and you may find yourself amid an open party, or comedy set. Stay tuned to their social media, and you will be privy to specials & experiences exclusive to Harrington’s Rocomamas restaurant.

I’m escaping work early, to get another bite of that Nutella Waffle, while I erase the stressful taste of this week, with one of their long-ass rocking #Rocktails! 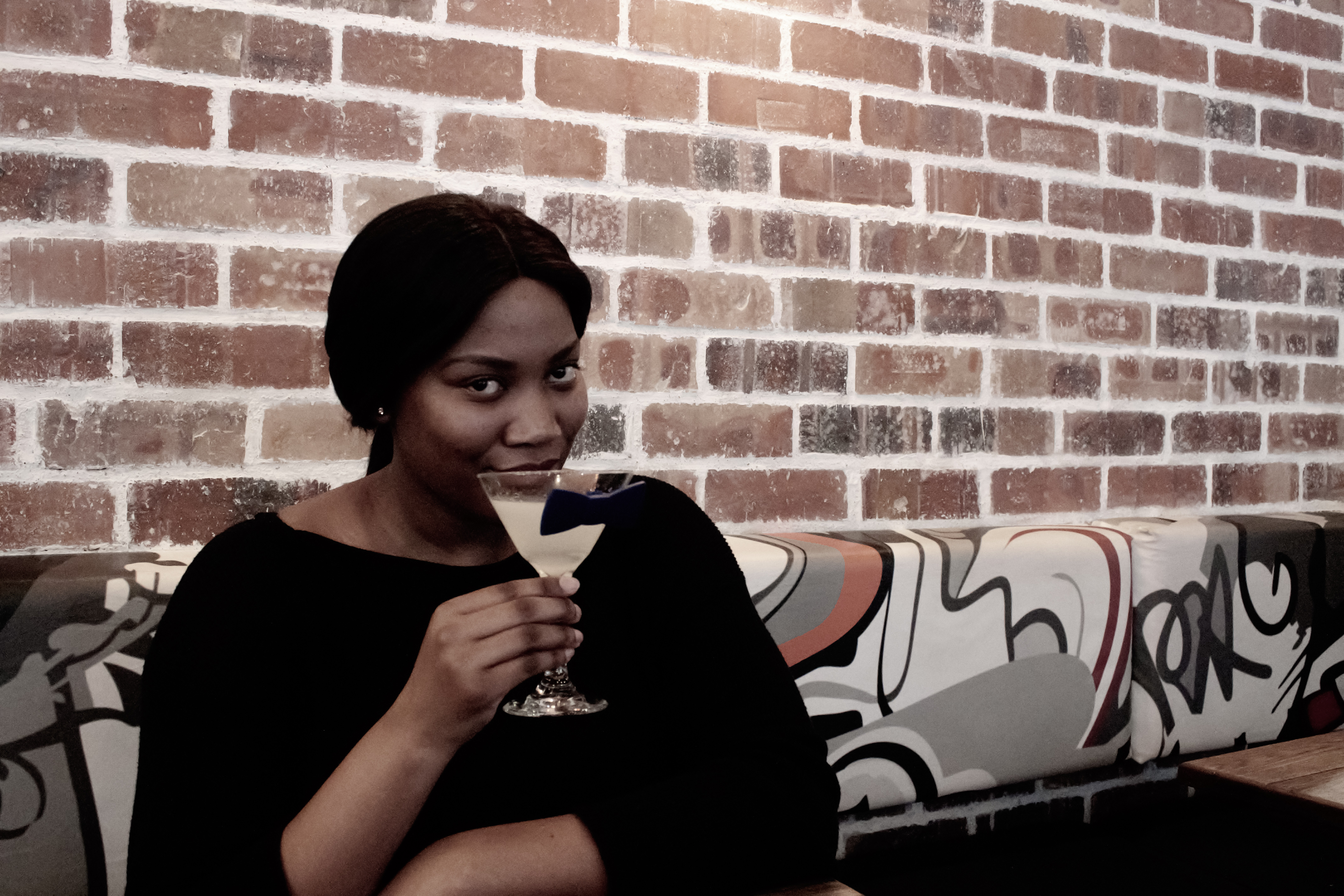