Firstly, Where Do I Stand With Whisky?

There are many things I’m a purist about – automobiles, heritage clothing, Christmas traditions, and even the role of James Bond – but whisky, is a topic of which I’m much more lax about, likely due to my fumbling ineptitude with its brewing & drinking principles.

What Have I Observed About Whisky-Drinking In Cape Town?

Disciples of whisky customs in Cape Town, seem to be niche and self-contained in their ardour of the golden elixir.

I have read about whisky tasters who rigorously self-police, denying themselves the ease of water or ice, and even some who enforce “no talking”, no distracting scents, or inappropriate glassware policies, for their sips.

In a April 2019 Gear Patrol article, writer Chris Wright discussed ‘The Murray Method’, a comprehensive list of whisky-tasting rules to master the art of the experience.

Among the stringent 18 rules, are these:

“…drink black coffee to cleanse your palate…drink the whiskey out of a tulip-shaped glass with a stem, at body temperature, and never (never!) add water or ice; nose the liquid naturally, sip it twice, the second one for flavor, balance, shape, mouthfeel, and finish; always taste it a third and fourth time to confirm your suspicions; spit to avoid becoming drunk; and be honest in your assessment.” – Chris Wright (Gear Patrol), on whisky writer & reviewer Jim Murray‘s ‘Murray Method’ (Whiskey Bible)

Who I actually witness, revel in the sheer potential of whisky (bastardisation, as some would claim), are young adults who never seem narrow-minded in their exploration of flavors – especially in a city that is world renowned for its food & wine.

My Reasoning On Whisky

By my own mind: When one drinks whisky, it’s memorable.

Beer is the everyday drink – killing time, parching thirst, and bound to the commonplace.

Whisky on the other hand, retains a memorable marker in the mind & tastebuds of its drinkers. It’s hardly ever about the flavor, unless the sippers are connoisseurs.

For the regular bodies pouring a finger in, drinking whisky is about: the value ascribed to its presence, its history, and the status symbol its endowed with.

Where Does Craigellachie Come In?

I have in fact tried ‘The Murray Method’ at a whisky tasting once, and it made for a potent use of my senses and sensibilities, but did not lead to an adoration of drinking pure whisky.

Craigellachie, on the other hand, did an unpretentious whisky tasting entirely more my speed – inviting me to an intimate space laden with fine whisky, good food, and great conversation.

As a result of their chilled approach to enjoying whisky, here are 5 reasons to enjoy ‘the bad boy of Speyside‘s brand of single malt Scottish whisky:

I enjoyed how its heather-honeyed sweetness came across, with tantalising strands of spice, pineapple & vanilla, floating through. There’s a polarising occurrence where the rich whisky is heavy on the nose, and surprisingly light on the tongue.

Because of the worm tubes, said to be used to cool Craigellachie‘s spirits as they come out through the stills, the mature whisky maintains low copper content which means unique fragrant characteristics.

“The spirit has long been prized by blenders for its ability to add body and density to a blend…accompanied, boldly, by marketing copy underscoring that Craigellachie is “anything but smooth.” ” – Margarett Waterbury, The Whisky Wash (10/10/17) 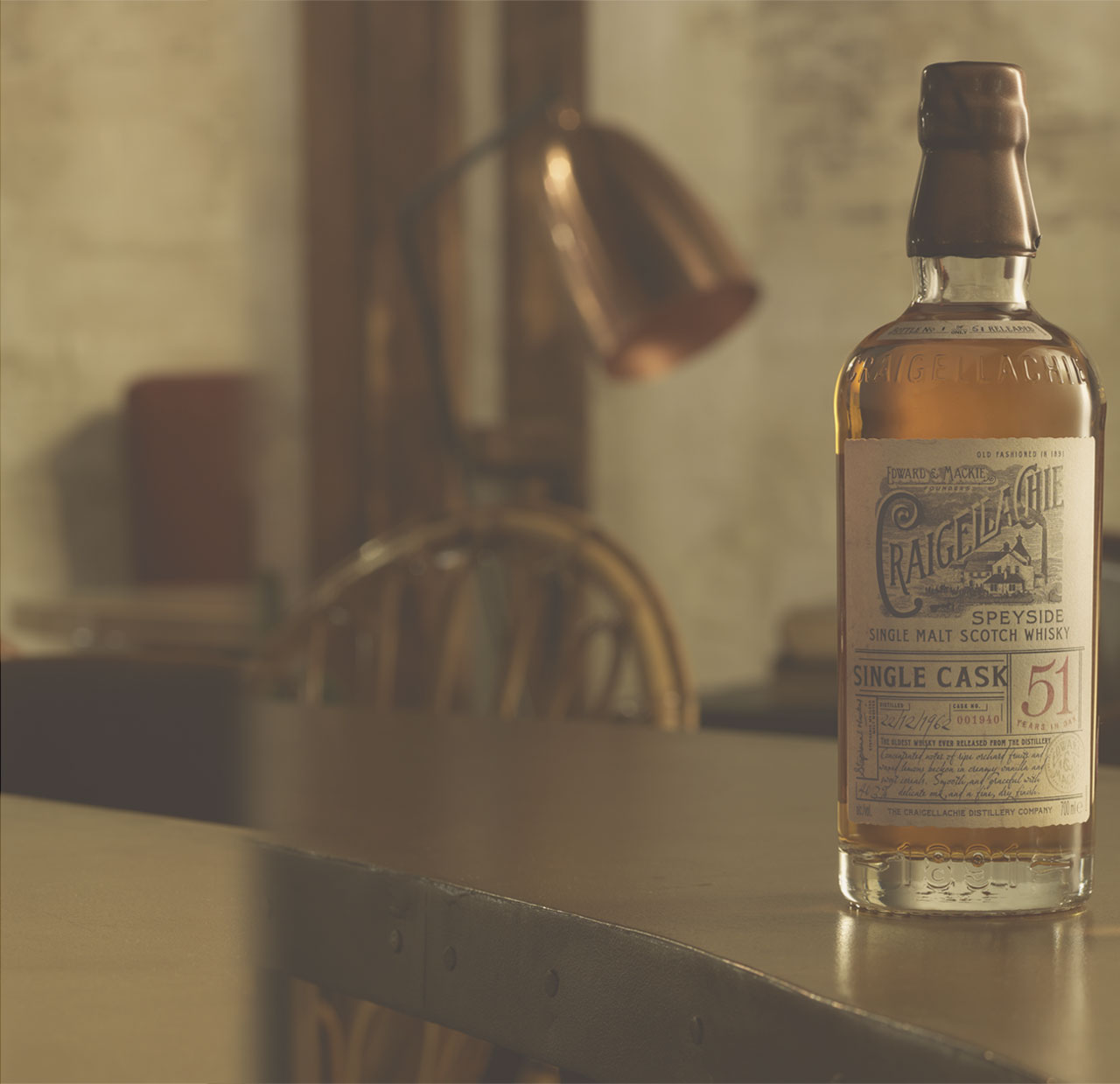 You know those glasses that aren’t for wine, cooldrink, champagne, or shots? 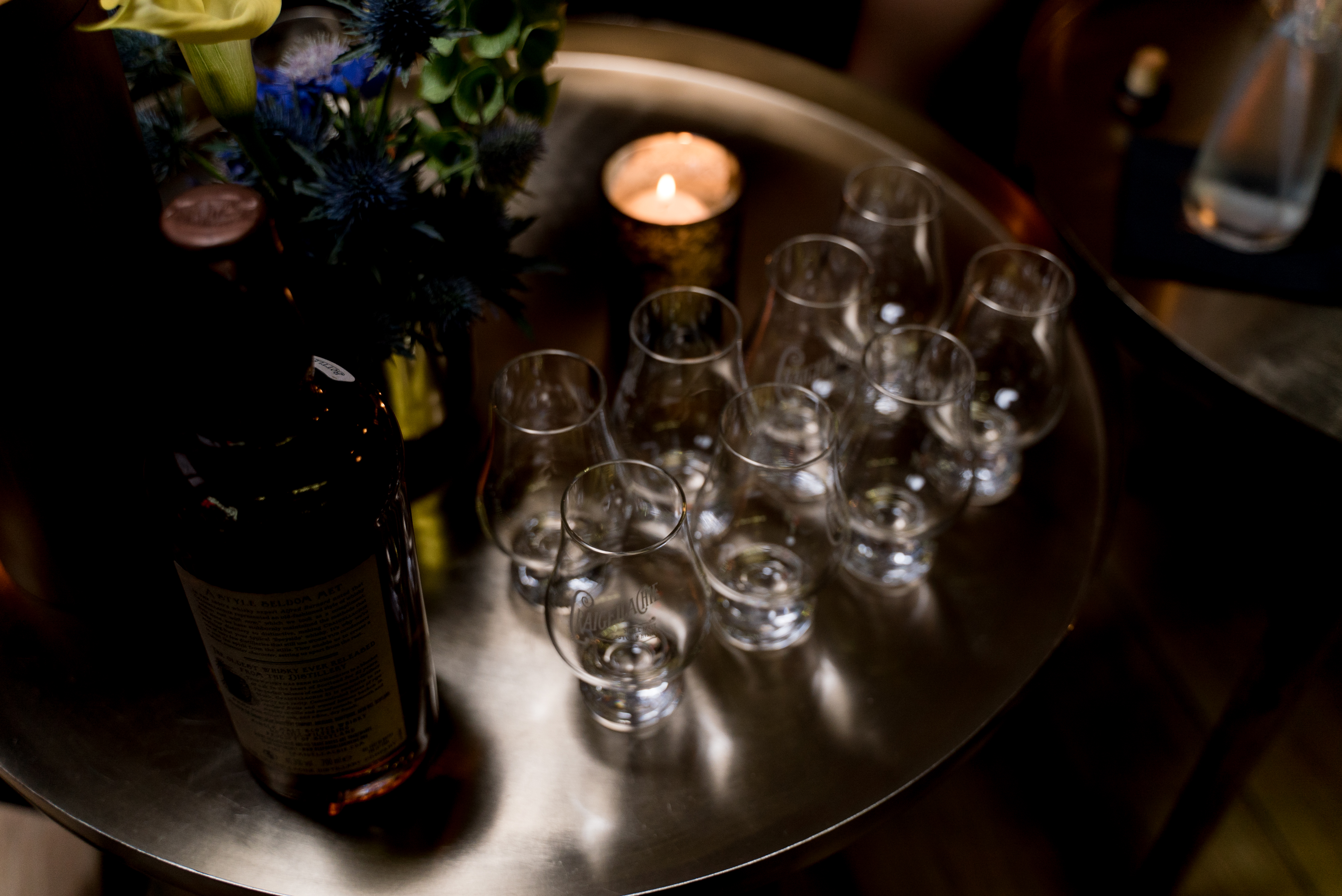 You’re probably looking at a Glencairn glass, which is designed to swirl liquid aromas up and out towards your nose.

Because of how progressive Craigellachie is, you don’t have to worry about finding one of those glasses, every time you want to drink.

As long as you swirl your liquid a little (yes, like they do in the movies), you’ll still be able to smell & taste enough to enjoy every sip.

Try the ‘Kentucky Chew’ Method (a few lip smackings, like you’re chewing, while the whisky migrates around your mouth) for more aroma & flavor enhancement.

I am a cocktail person through-and-through, so I am wholly excited when a serving recommendation or menu, allows me to get a sweet or zesty alcohol hit in the Summer.

There’s something intriguing about how the flavor notes of Craigellachie, evoke images of me mixing up a whiskyed Old Fashioned, or enjoying a sexy Manhattan while poolside.

You don’t have to own a glass decanter, to keep your beloved bottle of mature Craigellachie. The brand has dedicated time and effort, into the creation of really interesting labels, and durable chic bottles, to keep your whisky in.

Points for their Instagrammable look! 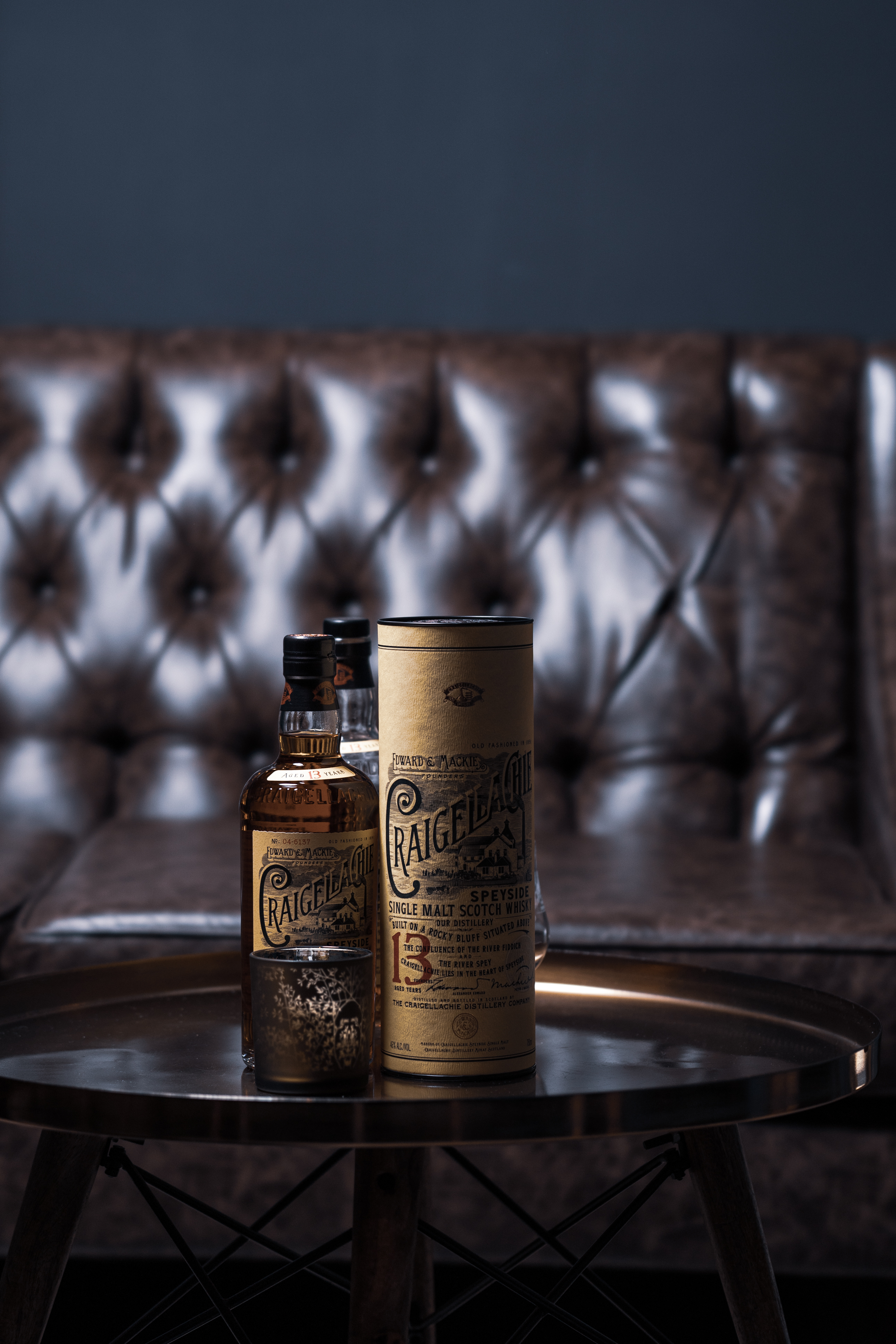 It is said that more than half of Scottish distilleries, are found in the luscious, rain-washed valley of the river Spey.

Founded in 1891, famed architect Charles Doig, was the designer of the Craigellachie distillery – co-owned by Peter Mackie and Alexander Edward.

The property is known to be downstream, from world famous rivals (that even I’ve known of since I could read labels from my mum’s locked alcohol cabinet) Macallan.

Production within the distillery, only began in 1898, with Mackie & Company only taking over in 1916.

In 1964 there was a refurbishing which took place, wherein 2 new stills for their whisky distillation were brought in – thereby increasing Craigellachie‘s still numbers to 4, and their yields into upwards of 4 million litres/annum. 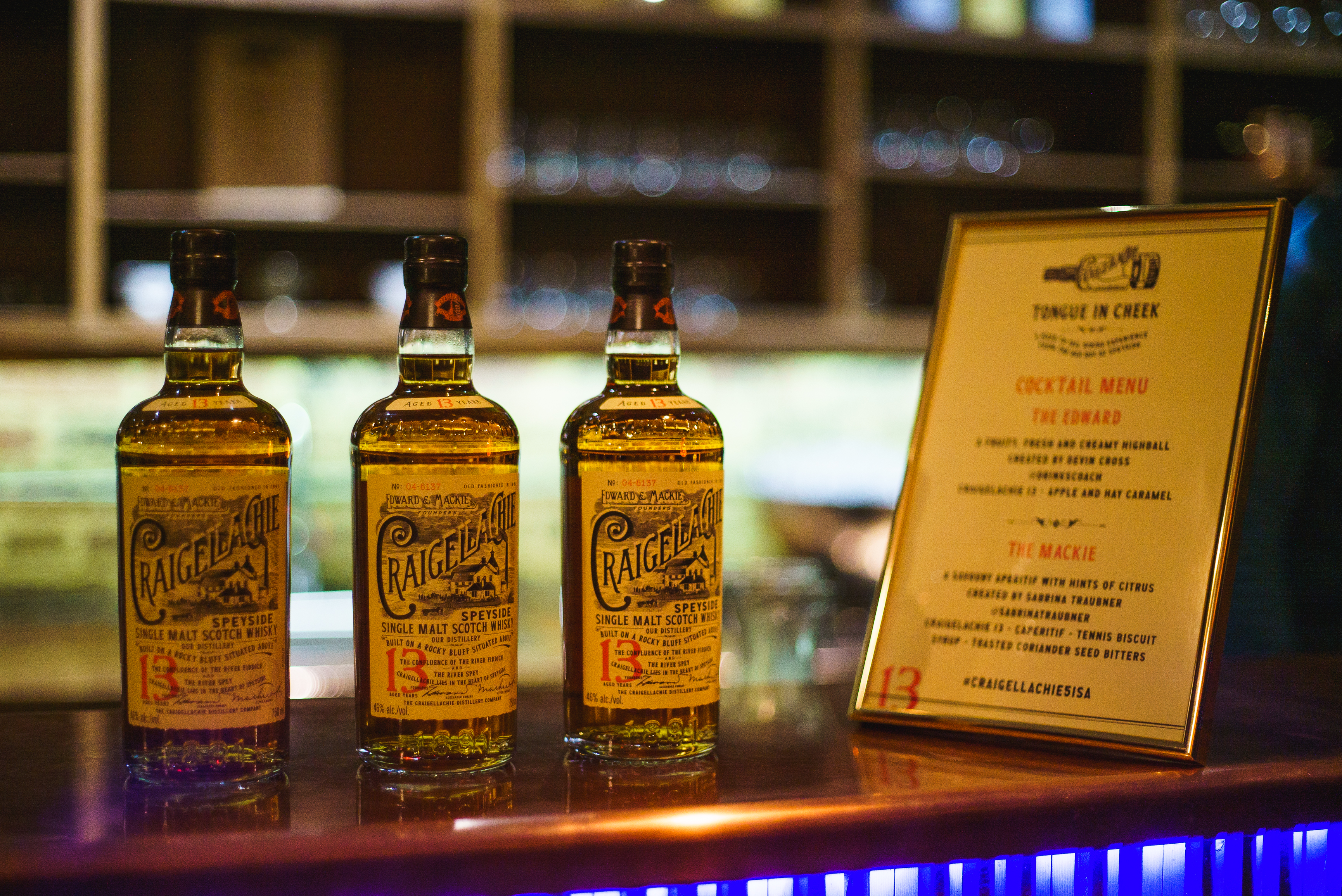 *Bonus: The Invite You Cant Even Score

96 tickets were up for grabs, for anyone in South Africa to enter, and win tickets to exclusive tastings in Johannesburg and Cape Town in November.

Bar 51 is the distillery’s pop-up series, and puts the oldest Craigellachie whisky, to the lips of regular whisky-lovers everywhere from New York to London.

It’s an ongoing celebration of infamous Scottish nights, and the whisky that’s accompanied them.

If you pray hard enough, maybe buy a bottle or 3, you may stand a chance to enjoy the Craigellachie experience with Georgie Bell, the Bacardi group Global Single Malts Ambassador

…it’ll take a miracle, but who knows?!