Grey, though the weather in Cape Town may be, but vibrant are the people and their hustle & bustle so close to winter. Those who have heard of Cape Town, have likely heard of our infamous Long Street – invariably a culmination of local and international aesthetic. Among the cafes reminiscent of New York’s SoHo neighborhood, the ‘authentic African’ street market peddling to tourists, and past the sophisticated simplicity of the European-style fashion boutiques color-coding their clothing to subtly to remind shoppers of glamorous safaris & sunsets, is a restaurant titled warmly to invite Long Street visitors to come in and dine.

This weeks foodie escapade, took me to Mama Africa. 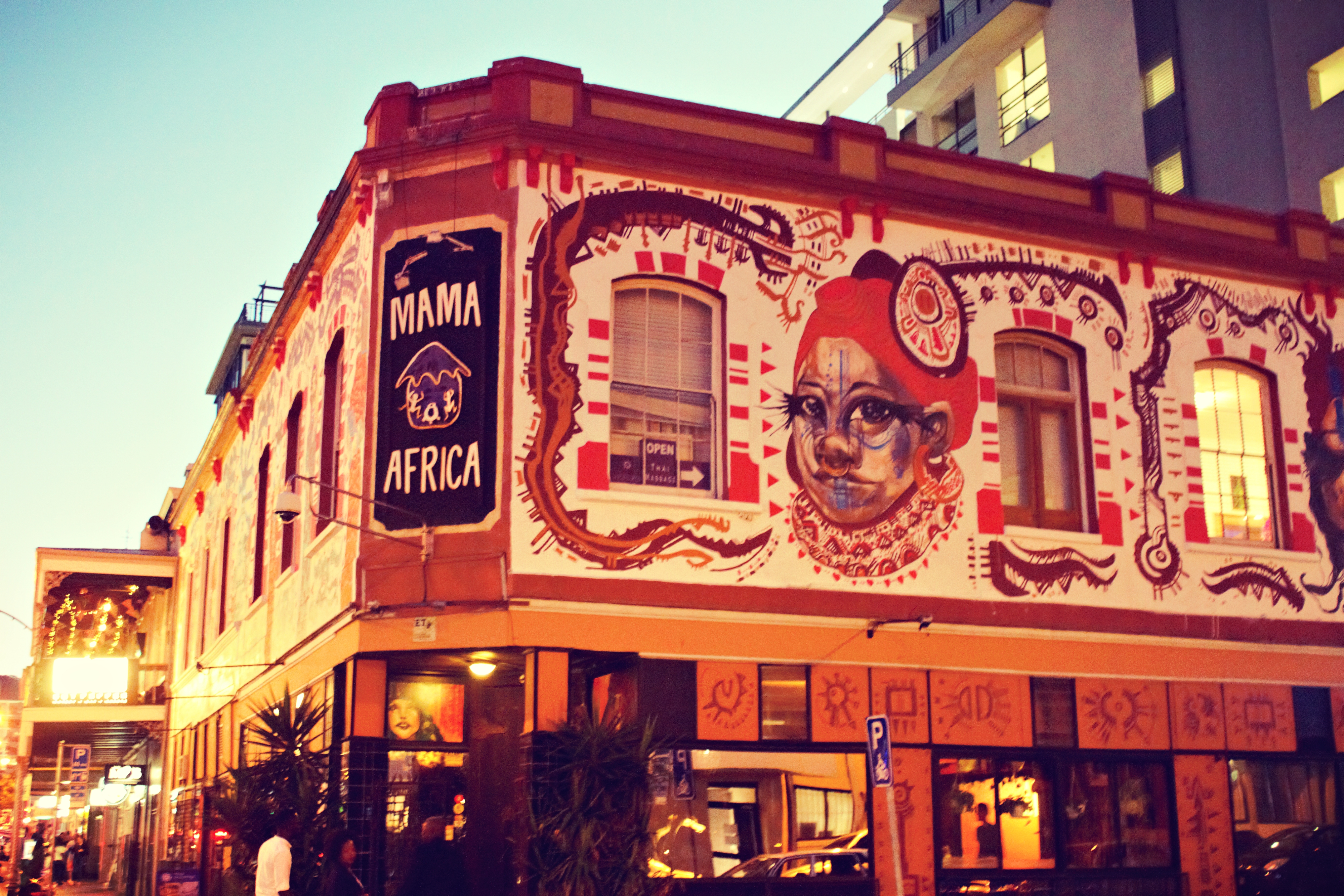 Capitalizing on the new age in freedom and equality for all South Africans(SA attaining democracy in 1994) Mama Africa came to be established in 1995, in “celebration of South Africa’s new democracy and of the vibrant diversity and hospitality of our continent. Since her opening Mama has served as an oasis for tourists and locals alike to meet, eat, drink and interact in a warm welcoming environment.”

The notion of ‘Mama Africa’ is one which predates the restaurant; being the title afforded to the more elderly black female Africans who implement the notion of community, as well as subtly acknowledging the links they pose to the idea of Mother Nature and her ofttimes giving & nurturing demeanour.

The restaurant chose to use this as their core identity marker, emphasizing that:

“Mama’s biggest joy is to have her guests leaving with a full tummy and a happy heart, so come to Mama as a stranger, leave as family. MAMA AFRICA is a great old soul who demands little. Her hospitality has become as legendary as the great memories spent in her company.”

First Course began with Mama’s Soup – a rather thick, broth-flavored concoction that would make an ideal addition to ones winter season dining. No bread, or any other extras required. This soup is filling and has an ease of smooth taste, to warm and fill ones insides.

The East Coast Mussels are the best thing I ended up tasting at dinner. I enjoy seafood, but ofttimes the textures and horror stories one hears of illnesses occurring from dining on shell-fish, have me wary. However they make the mussels, the Mama Africa starter is a solid 7/10 thanks to whatever buttery yummness they drown the mussels in, on your plate. 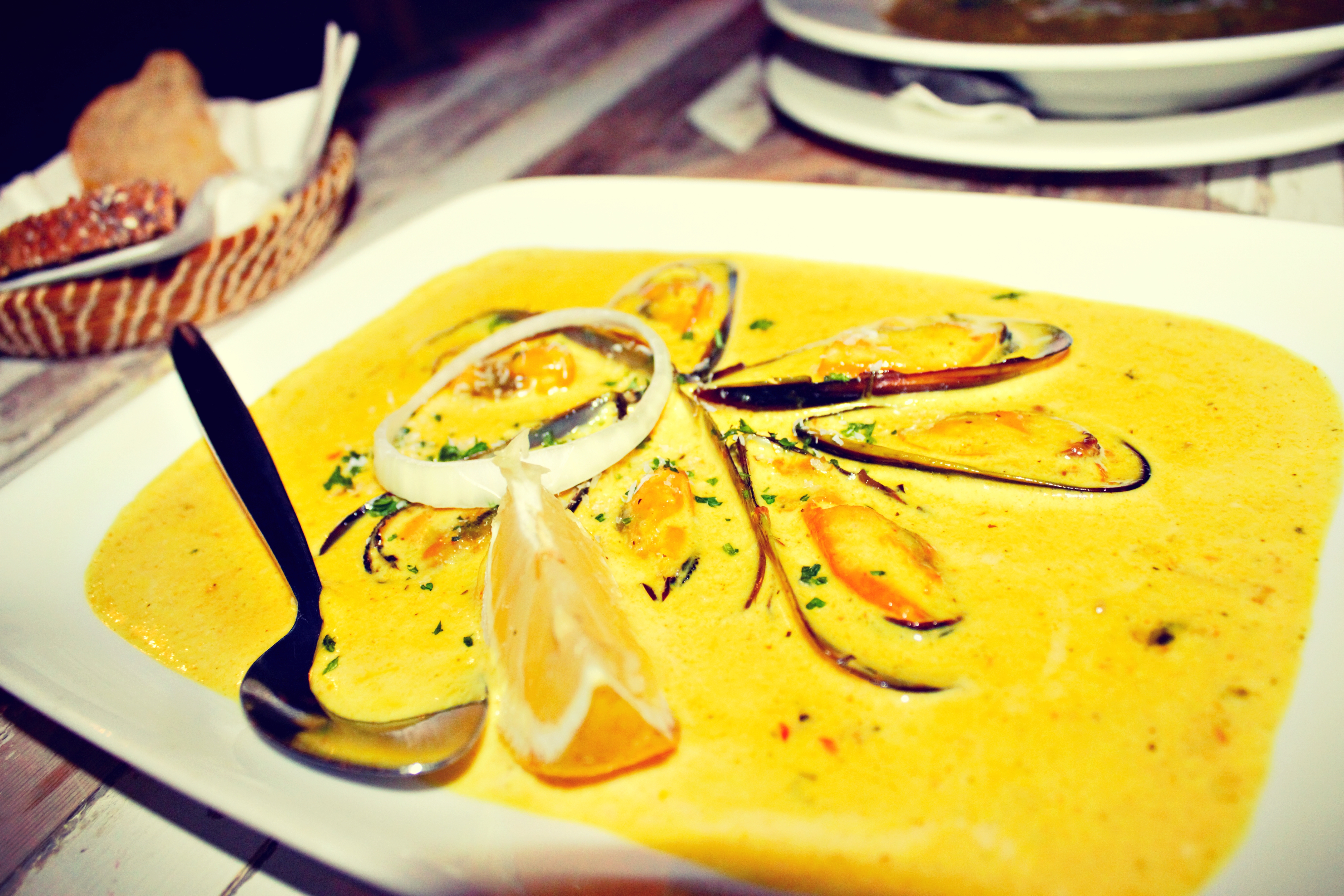 I chose two mains, after consulting with the waitress:

Mama’s fishy catch of the day, which is baked and served with rice, vegetables & the sauce of the day. It was nothing to write home about; too similar to a fish-and-chips lunch at Ocean Basket.

Then came Mama’s Wild Game Mixed Grill , which included a mix of meats from: crocodile, ostrich, springbok, kudu & even a little venison sausage. It was the Warthog that stood apart for me. Never having considered having a bite of the wild beast, my first time biting into this meat was pleasant, thanks to the well-made medium rare meat and light seasoning. The other game on the grill, was overwhelmingly under-seasoned for me, but they all maintained the perfect medium rare tenderness that good grilled meat or braai meat should have, to be enjoyed wholly. 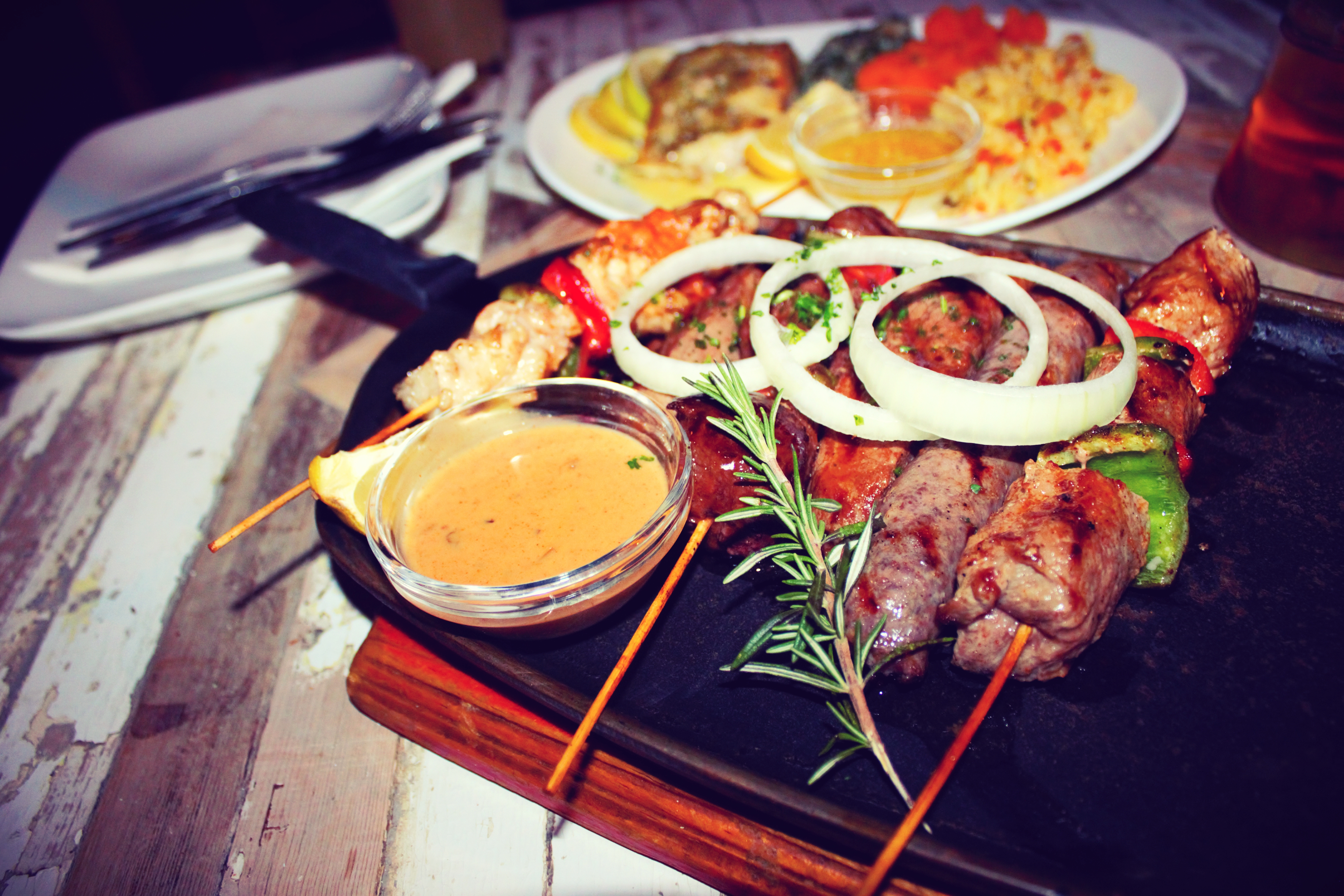 The vegetables offered – baked spinach and sweet potato – were really, really good. The restaurant should find a way to mayhap specialize in them, or ensure visitors know that that is one of their best offerings. I highly recommend them as mains, or sides; while the garden salad at Mama Africa is not to be ordered. Its just…to bland to ever suffice as a worthwhile order. Also I think I bruised my gums trying to chew into their beautifully cut carrots. 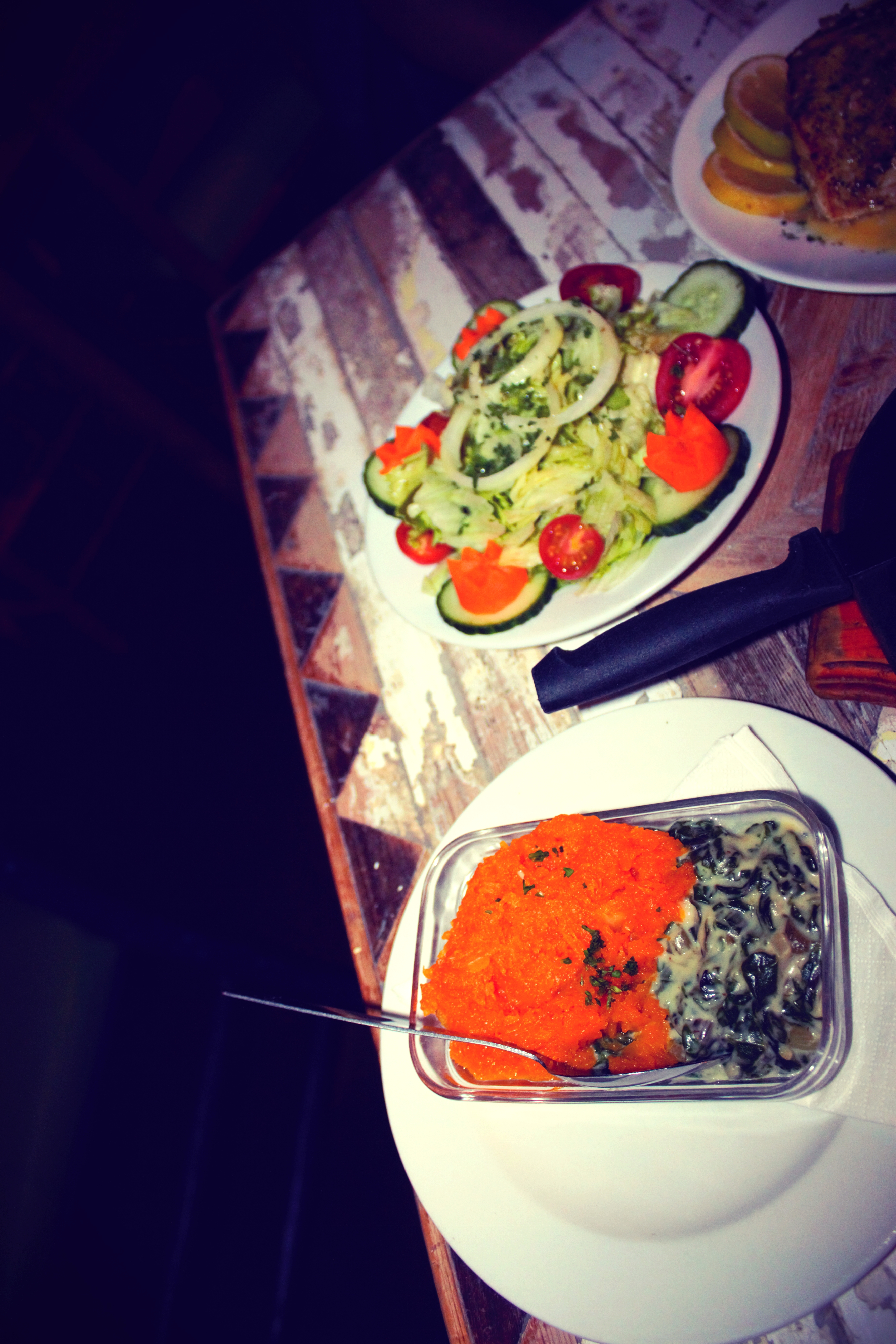 Mama’s Sweet Treat Platter to share, includes: Malva Pudding, Vanilla Ice Cream, Banana Flame, Chocolate Brownie, and Coco Pine pudding. They brought it on fire guys. I thought there was a kitchen mishap…then the waitress explained what was going on with the Banana Flame (which is made from so many types of alcohol).

Obviously I started with the banana flame.

It’s not exceptional in the way an expected creme brulee is just outright steady good off-the-bat. This dessert though, is arguably the definition of a taste experience. The flamed out alcoholic syrup the banana floated in, initially has a tart, burning sharp, simultaneously bitter & sweet AS ALL FUCK taste that just confuses you into wanting to eat/drink more. Then you nibble on the banana, go back to the flame syrup…back and forth till you realize you’ve finished the dessert… like “what just happened?” A taste experience! That’s what you’ve just gone through. You spaced out into a weirdly tasty taste adventure, while not having even touched all the other goodies on the platter. Everything else is made exactly as expected, so brownie tastes like a regular ol’ brownie, malva, ice cream etc. It’s all okay.

You’re on Long Street and need to eat. The other restaurants and cafes are filled to the brim with noisy drinkers and hipsters. You just want to be able to think, while you eat and enjoy people-watching…maybe also listen to a live band, instead of that incessant pre-recorded racket, right?

Mama Africa is the stop for you. Come for the cheesy ‘African’ ambiance (not quite played out yet in a cosmopolitan city like ours, which is always pulling in tourists from all over the world). South Africans may not vibe with the recurring motif they live, and tame food very much likely already a part of our daily meal plans; but this is one of those safe stops in Cape Town, to experience another reductive version of the modern African experience. 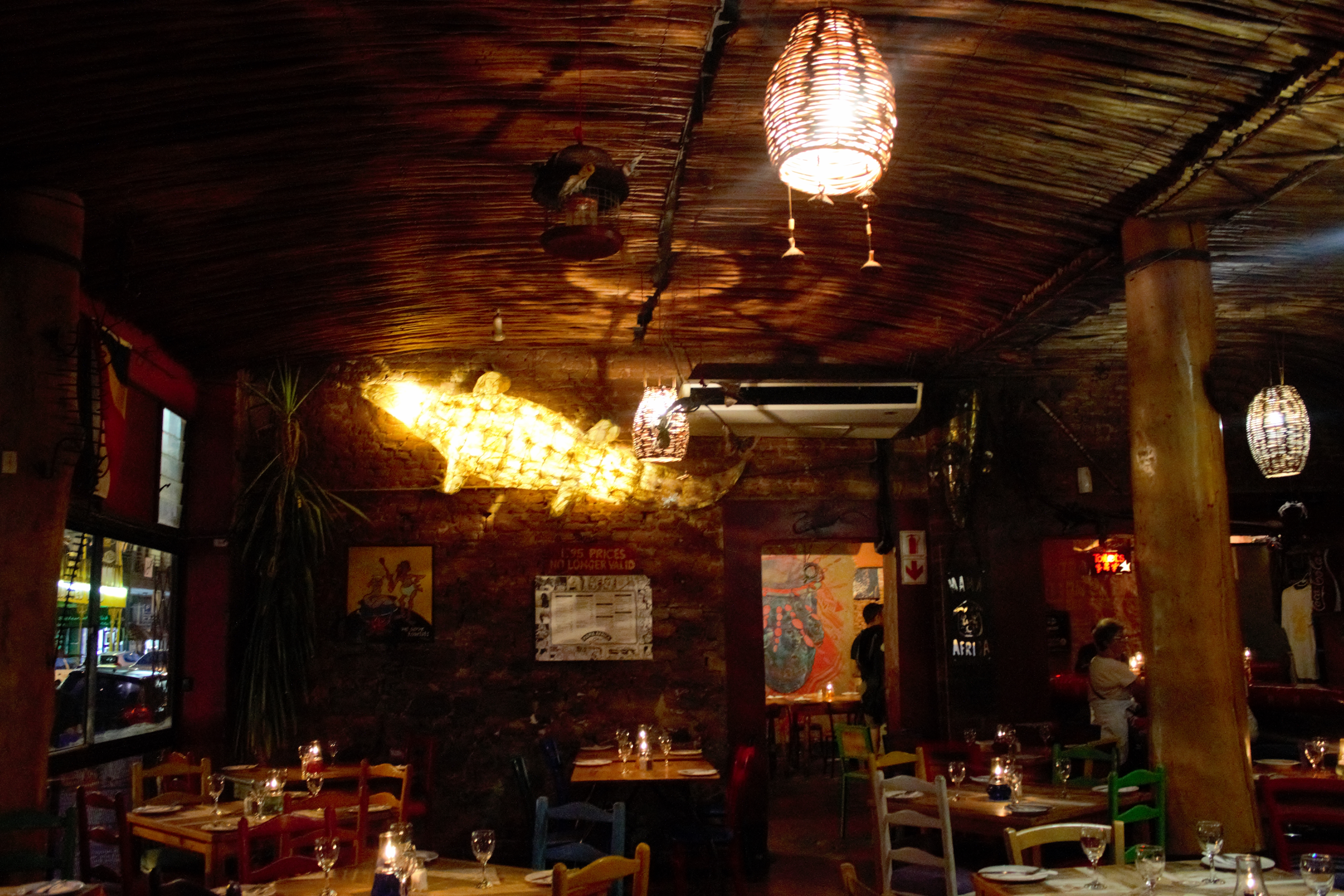 What about the vegetarians?

Apparently there is such a thing as a vegetable curry(Lord! I wonder if they have ground-up, deceased vegetation in there); there are pancakes and more for you at Mama Africa.

It’s actually a rather lovely – though severely limited- selection of grub for you veggie folk to dig into.

Mama Africa has a Snake Bar (no real snakes thank the Lord!), which serves all kinds of drinks. Beer, wine, cocktails are at the ready.

When asked if you’d like water, be wary of the fact that Mama Africa charges more than 30 bux for their water. I got a shock when the bill arrived. 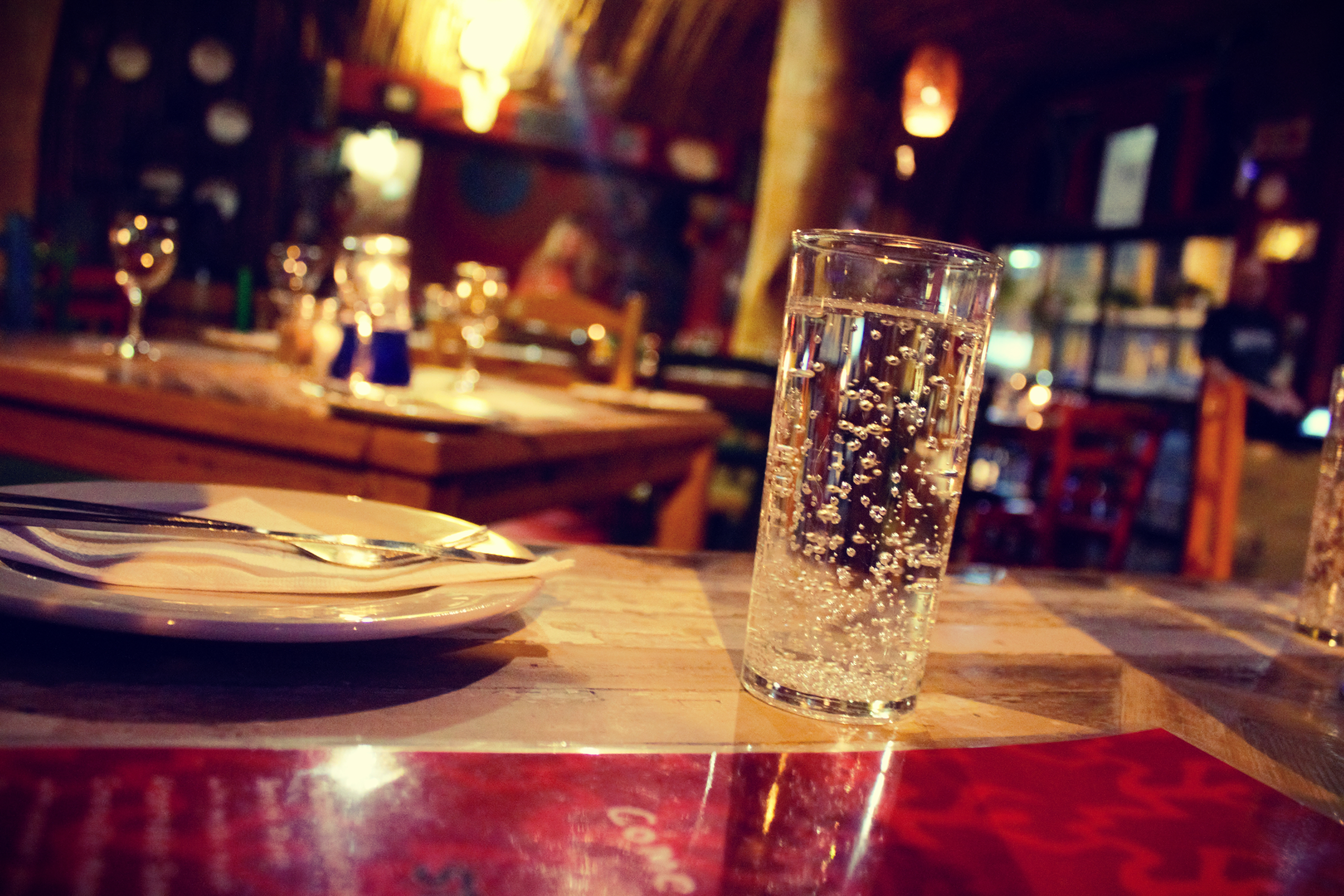 Also note, that should you request your cocktail be made a bit stronger (as it likely will literally taste like no alcohol is in it), you will be charged for an additional shot, rather than it be initially made correctly or fixed complimentary, to avoid such a request being necessitated. 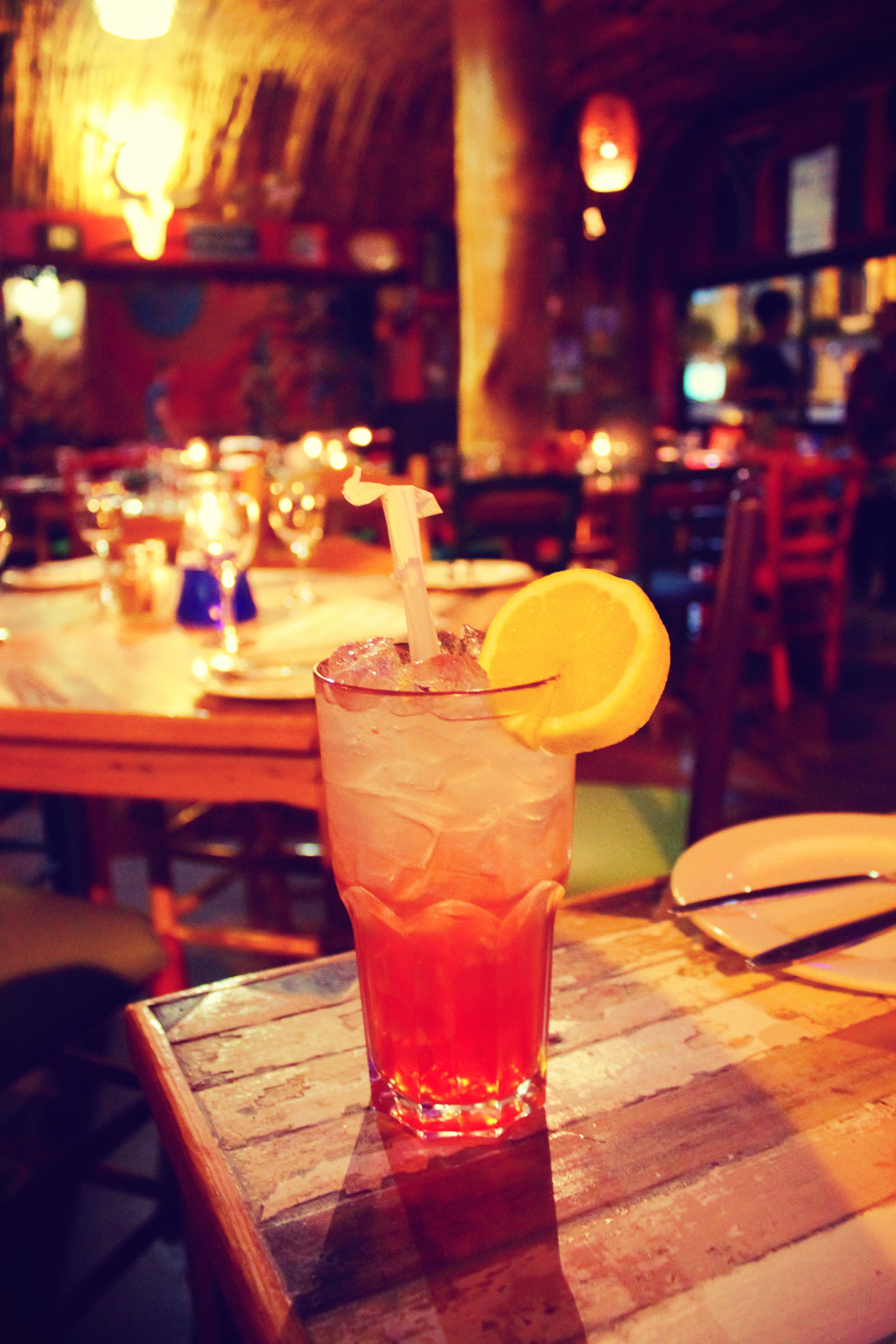 *P.S: There are soft drinks, juice and water for the non-boozers.