May Day! May Day!

It’s a new month, and with it comes new lifestyle adventures. This post serves to notify all readers to a solid dining option in Cape Town, this new month.

Amid my relaxing weekend at the hidden O on Kloof Boutique Hotel & Spa in the city, I pushed myself to venture beyond the walls of my gated luxury, for a bite to eat. May Day’s foodie escapade took me to the Beluga Restaurant.

Cape Town is very much like any other big city in the world, with an amalgamation  of different people, interests, cultures, and eating habits. Most of all, each city welcomes discerning (gluten-hating) foodies operating new companies and food blogs from hipster cafes, trend-focused individuals chasing their next 10+ likes for eating instantly gratifying (questionable) street meat from food carts appropriating cheap survival eating habits, as much as they embrace the stalwart, loyalty-driven crowds reserving tables for a gastronomical sound fine dining experience.

Beluga Restaurant happens to be one of those dining joints which, not only tempers the ofttimes clashing groups of taste, but satisfies them…and quite easily too – whats up with that?!

This restaurant is not ‘South African’ in the archetypal mold such a stereotyped categorization would render a person, place or a thing. Beluga carries the identity of New York and San Fran’, Tokyo and Miami. Its got Johannesburg’s urban city glam, and a touch of Nobu’s famed earth-toned escapism. Beluga’s design entails the marrying of elegance and exoticism that isn’t too far off the beaten path of normal restaurant style, so as to make diners uncomfortable.

Beluga has decided to create a Summer Menu for diners consideration. It is a mix of some of their most celebrated dishes in their Main Menu…at a fantastic cost(my wallet thanks me).

Between my friend and I, we had a first course that included:

Beef Carpaccio with sundried tomato, parmesan, and a balsamic reduction. Even if I was to draw a comparison with the only other experience I’ve had with Carpaccio, Beluga’s offering is unequivocally burdened with the advantage of making a delicious Carpaccio.

I also had a Salad Ceprese with basil-infused confit tomato, bocconcini, and a balsamic glaze. Guys, I swear that cheese tasted – and had the texture – of regular polony.

I really enjoyed the salad in its entirety though. It should be a mandated start to a meal, due to the freshness,which leaves your appetite piqued. 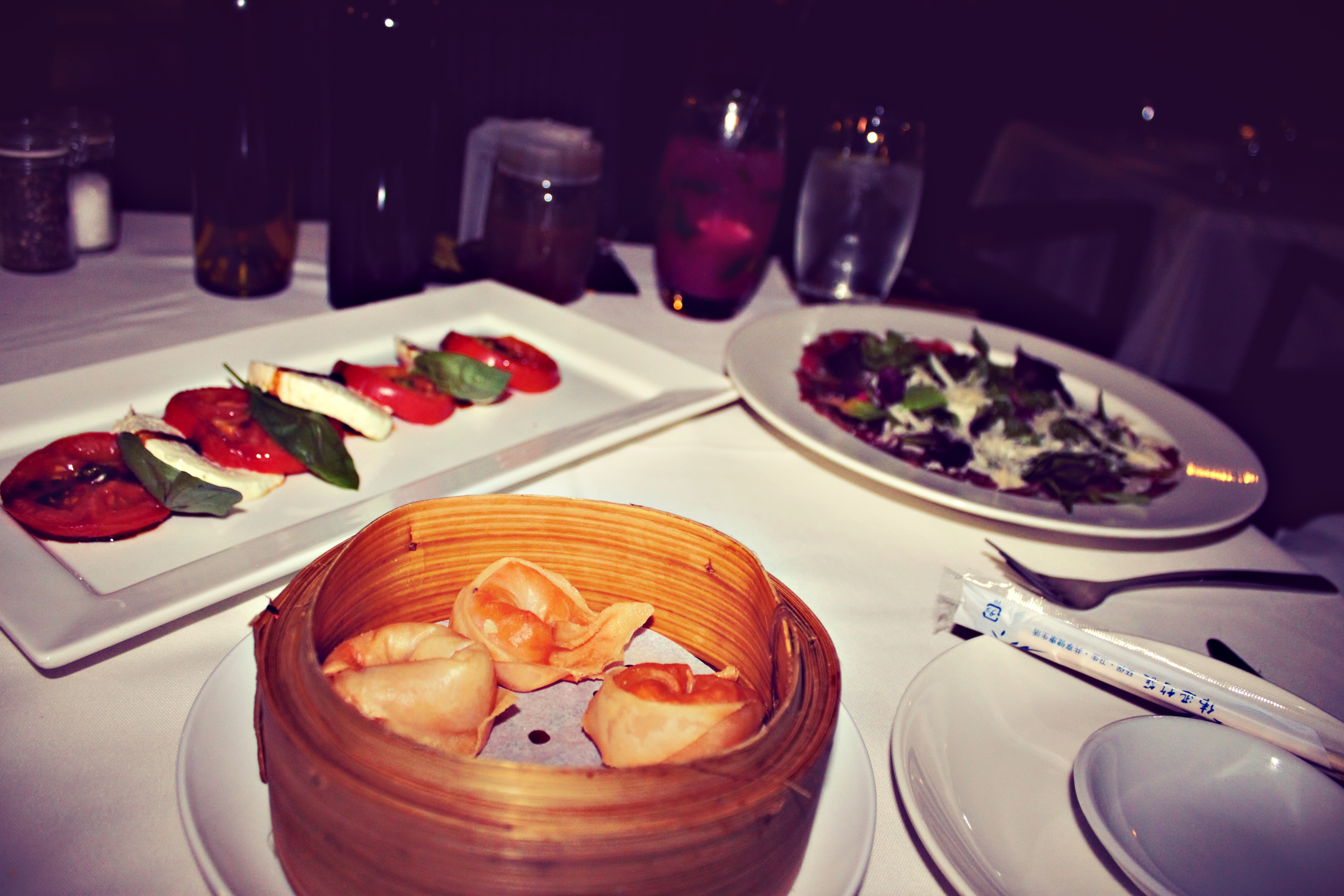 Prawn wonton‘s having a taste too simply for me to find them anymore than “alright for consumption”. My awesome attendant, Evidence, decided to weigh in with his recommendation for an alternative to the Dim Sum I’d ordered; and his choice turned it all around. 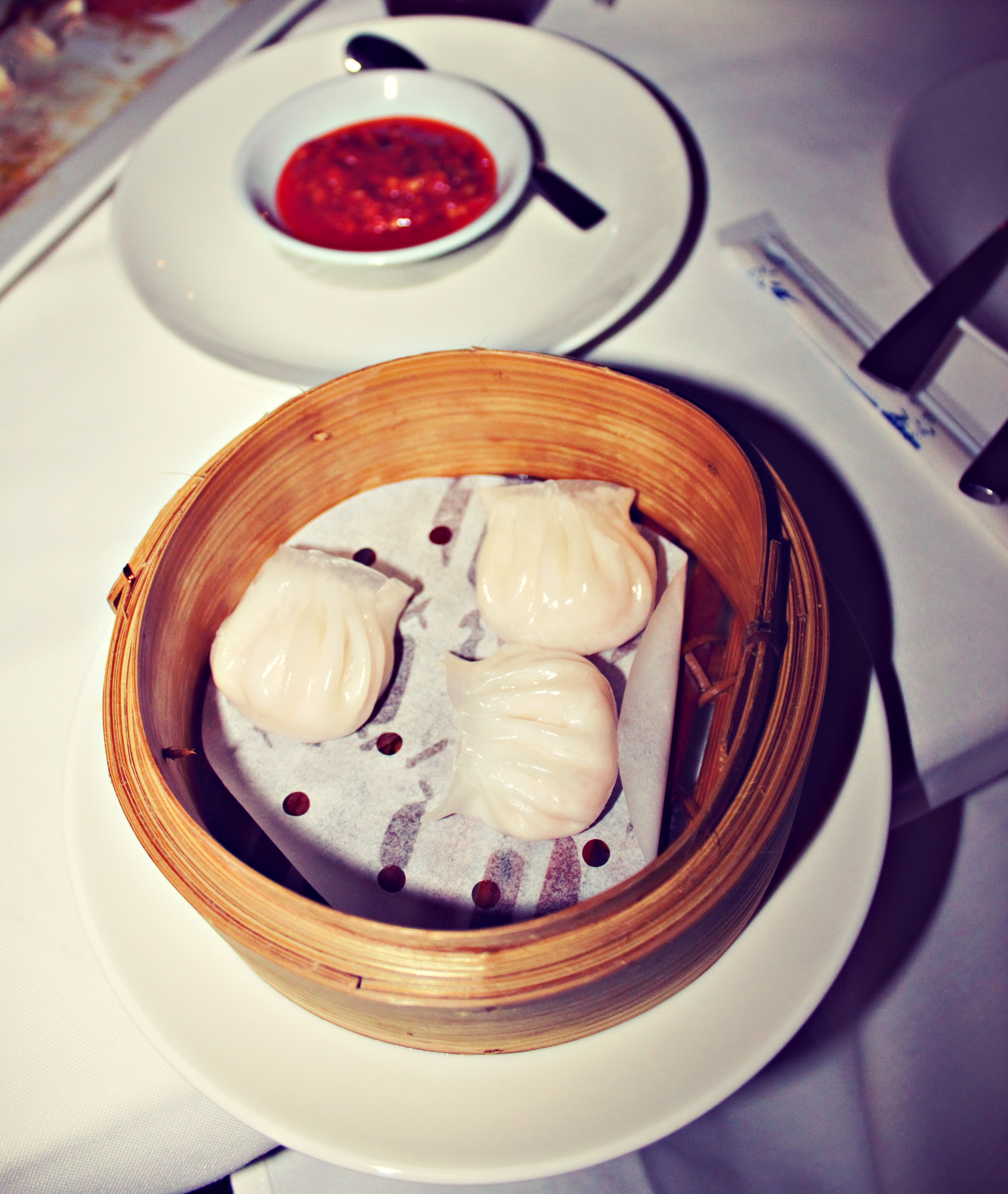 Huang Dim Sum is yummy as fuck, with some chili added to the mix.

The second course was Crispy Duck with apple chutney, roasted leeks, and spring onion. While not exceptional, the crispy duck is entirely filling and flavorsome. I like a little more spice in my food, but I understand having to cater to the greater majority.

The third course of a Vanilla Creme Brulee, was an okay finish. However, not bringing it atleast hot(-tish?) makes eating the just-below-room-temp dessert, a slow and forgettable moment – and not an experience to savor.

Beluga is acclaimed for its extensive sushi line-up, but you could arrive with a hankering for anything, and leave atleast mildly appeased. Their Dim Sum choices are what I will return to complete sampling; but diners have been known to be deeply satisfied with everything from the beef Wellington, spaghetti and meatballs, right to the crustacean platters and slow braised beef ribs.

Go to Beluga to fill that tummy, drink them drinks, rub shoulders with fellow Instagram-lovers and foodies alike. Bring your family, celebrated adulting, or drop in to just soak up the vibe quickly. Beluga is here for your dining out needs.

What about the vegetarians?

There’s actually a rather lovely selection of gourmet grub for you veggie folk to dig into.

Listen, even if you don’t eat their good food; I HIGHLY recommend drinking at Beluga! Their shooters and cocktails are the stuff Girls Nights Out, Date-Night and Spring Break, are made of. It’s like your pre-gaming. You don’t feel any of the effects of their drinks, till you’re leaving feeling happy and stuff.

My attendant Evidence, plied my friend and I with incredible shooters during our meal. I think I’d have a hard time choosing between drinking at Beluga or Asoka.

Beluga has got a full bar for customers, with a rather nice wine selection, bubbly and other booze to make rich ballers feel godly, as well as craft and local beers.

*P.S: There are soft drinks, non-alcoholic cocktails, juice and water for the non-boozers.