Like I said the first and only time I ever reviewed a Vegan joint:

“By definition and stereotype, I am a carnivore in the truest sense of the word. I’d damn near dropkick asparagus, to get to some gosh darn beef!”

However, in the continued spirit of expanding my knowledge in this new year, and exploring all dining adventures which Cape Town offers up, I tried the other side of the foodie spectrum once again.

Yesterday, I tried recovering from a long day of work by heading deeper into the central business district of Cape Town – in an attempt to mute my tummy grumble too. Say hello to this weeks foodie escapade stop: Lekker Vegan. 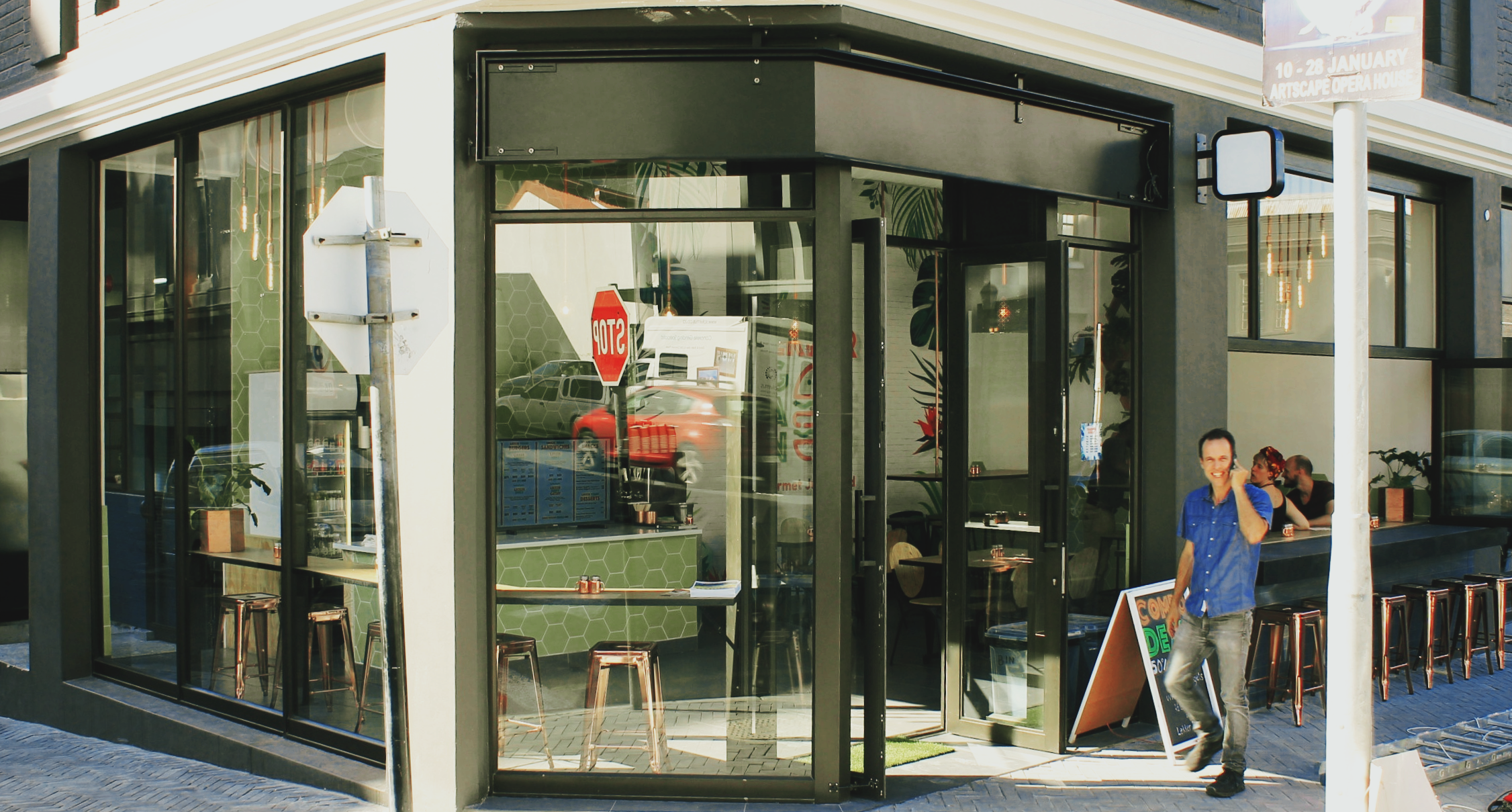 Where all other vegan joints may be vilified by the great meat-loving majority, Lekker Vegan deserves a nod – and your money – for figuring out & exploiting mainstream stomachs prevalent weakness: Junk Food!

Lekker Vegan is in the business of ‘Gourmet Vegan Junk Food’, a paradoxical series of words that you can bite into.

They’re good; and their skill-set in a niche‘ish food lifestyle, is complemented by the gentrifying neighborhood they’re in, and the interior design.

The minimal evergreen interior design is set-off by the well-placed green & orange logo, visible to the passerby’s. Bar seating with high windows pushed open, opens up the interior, in an otherwise small square inch space. There is the surprise of sophisticated brass lighting fixtures, set to the starkness of white walls, decorated delicately with vegetation in earthtones of burnt oranges, browns, blues & deep greens. It’s all the appeal of a cafe in a cosmopolitan city, with that itty bitty grit of a takeaway joint, owed in part, to the wooden tables and chairs. 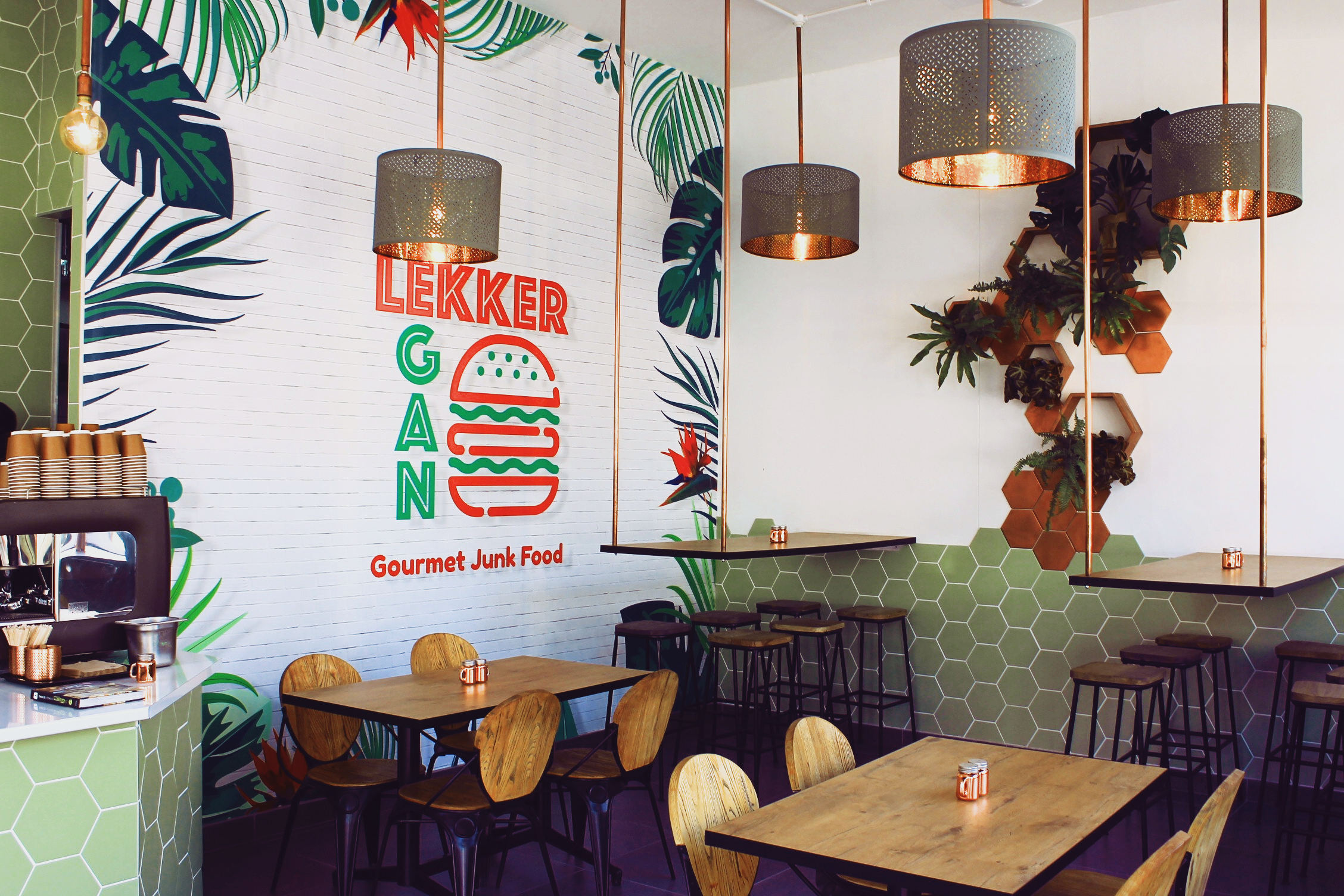 While I soaked in the fresh vibe and the contemporary playlist catering to a sleepy post-festive vibe, the owner, James Knaap, provided a kernel of wisdom of just how negatively impactful bringing beef to our plates, really is.

Did you know that 1 pound of beef takes 1 800 gallons of water to produce it?

To contextualize that, for us Capetonians who are currently going through a drought: The water usage is equivalent to ninety, 8-minute showers.

So now that I feel kind of bad for my love of red meat, let me tell you what I ate, and why you’ll end up on the corner of Barrack & Harrington Street sometime soon, too.

I was expecting some complicated menu filled with entire substitutions of mainstream carnivorous dishes. Turns out that the Lekker Vegan owner really took the idea of setting themselves apart from the norm, to heart. They have created a menu of foods we crave every other week; I’m talking mile-high burgers with all the fixings, nuggets and their dipping sauces, sandwiches oozing tastiness, and much more.

Eventually we settled for the only cruelty-free vegan beef Gatsby in Cape Town. 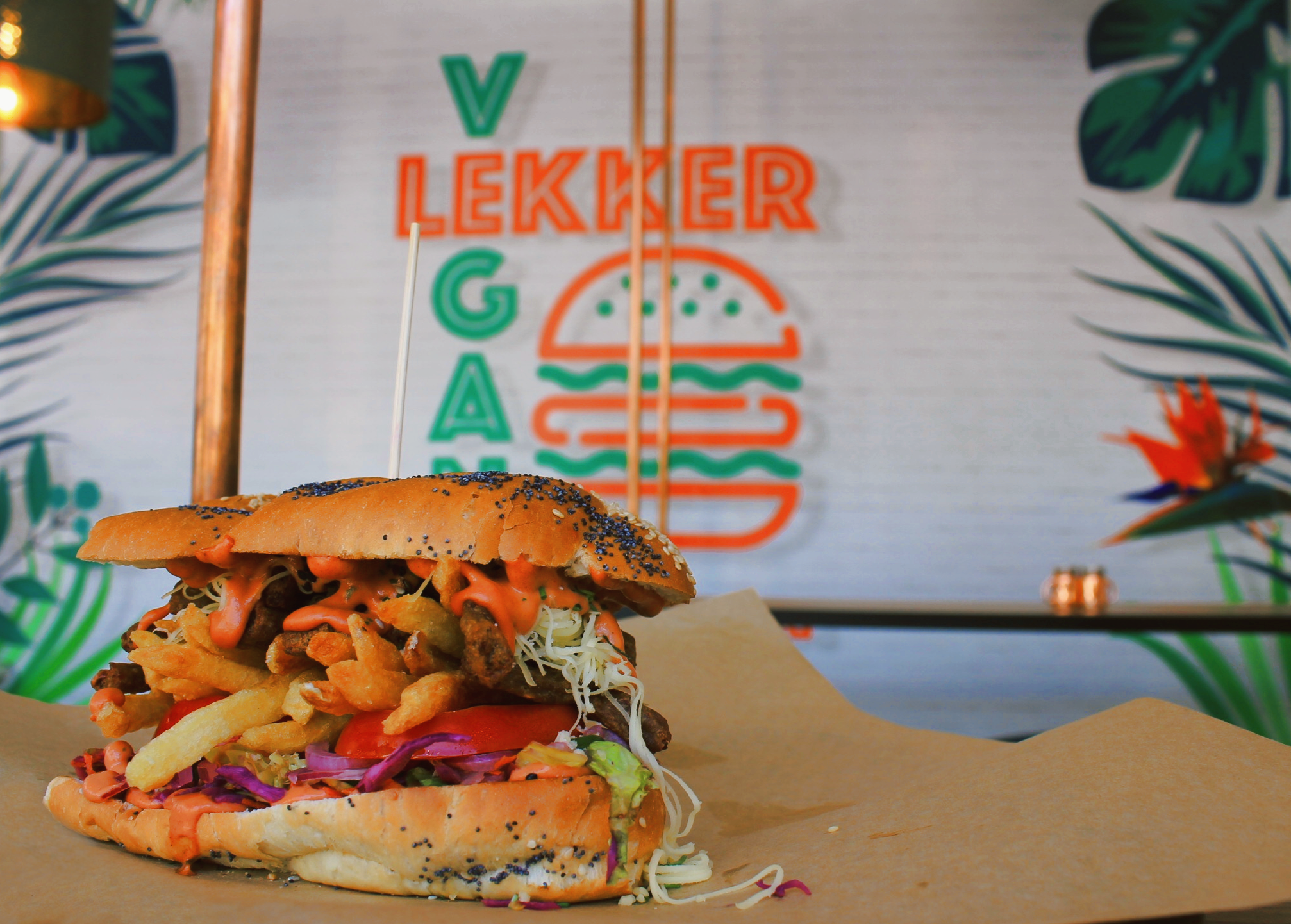 My Beef Gatsby was so good, I took it home with me. We’re going steady now. LOL

…but honestly, this version takes after its gluttonous siblings, with its stuffed center laden with: plant-based beef, slap chips, fresh lettuce, tomato, and assorted garnishes, all dripping lightly in this crazy yum Lekker OG sauce. You’re unlikely to find its vegan equal within the bounds of this city.

Accompanying my already scrumptious late lunch, was 6 nuggets and a melted cheesy surprise.

I always fuss about presentation because I think its indelicate for a restaurant to not take pride in the way their food is dished. Lekker Vegan forgoes formality, but doesn’t lose clean & simple delivery. The food is brought in containers or trays with brown paper on top, to ensure your indulgence doesn’t cause a right mess.

You guys 😭Vegans are getting so good at ensnaring us carnivores, with good food 👀 BEWARE THE AWESOMENESS! I had one hell of a late lunch/dinner at @lekkervegan today…and boy! Do I have a story for you 😏 Stay tuned for the full review(Blog link in bio) #lekkervegan #lunch #dinner #veganjunkfood #capetown #herbivore #westerncape #foodie #food #restaurant #foodlife #southafrica #lifestyleblogger #klaasinsession #veganlife #photooftheday #instaeat #foodreview #fashionblogger #lifestyle #foodporn #diningout #foodies #nomnomnom #vegans #gatsby #vegansofig #plantbased #gourmetfood #restaurantday

For those not of the carnivorous persuasion, it’s actually a bit of a mission finding a dining establishment in Cape Town dedicated to your actual cravings – f*ck the needs! Cape Town has the lifestyle basics generally catered for.

Lekker Vegan is an indulgence for all diners alike, who want junk food with a little gourmet plant-based specialty thrown in. If you think I’m lying, just know that 30% of their current clientele are actually carnivores.

The restaurants ‘ace-in-the-hole’ as it were, is actually not on the menu; it’s the easy rapport between the owner James, and his manager TK.

Together, these two guys deftly manage the restaurants impressive clientele (for a month-old business). Their light-hearted optimism about the future of the vegan lifestyle and their place in it, as well as their customer service, is matched only by the rest of the staffs efficiency and warm service. 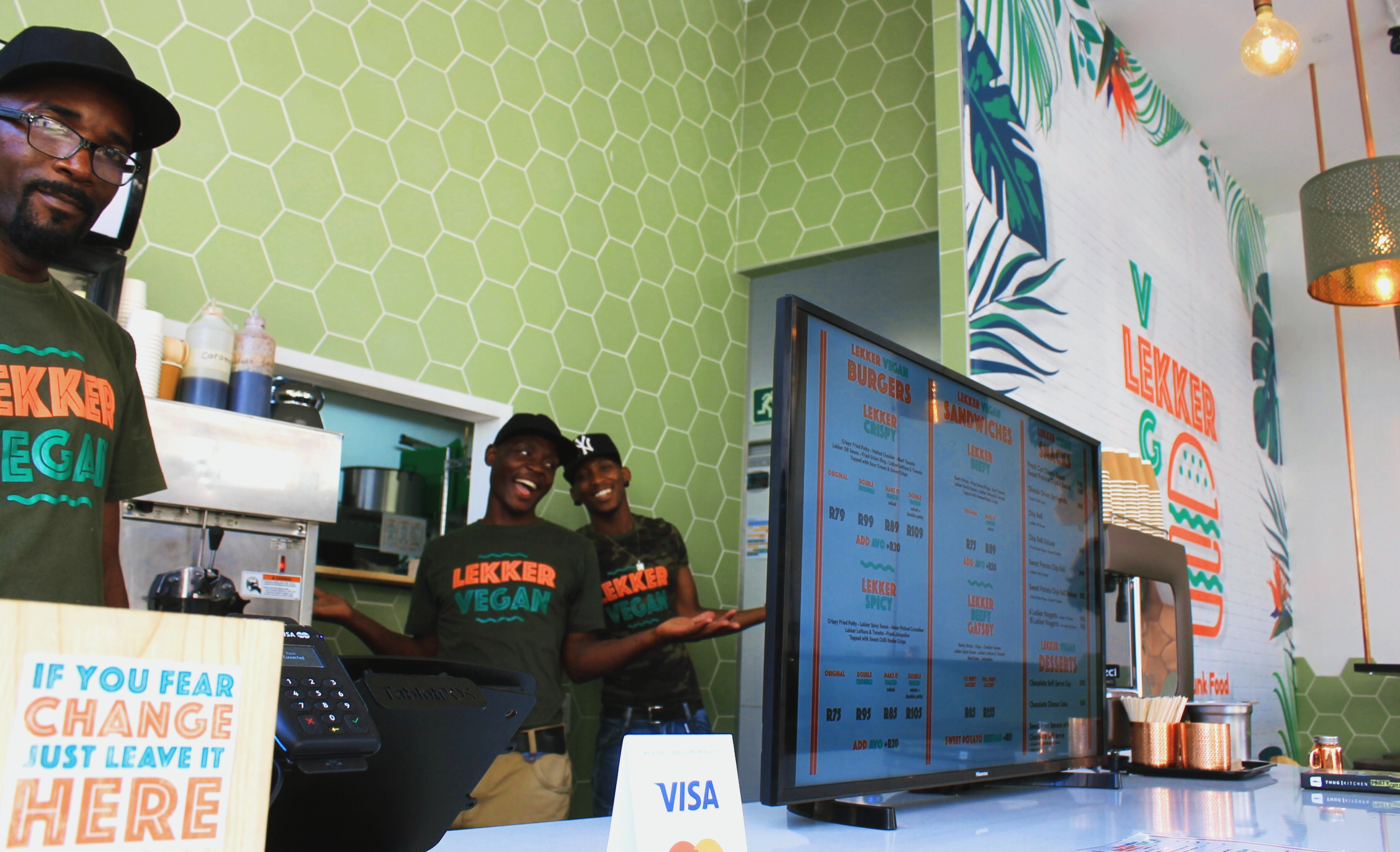 I’m considering a return trip. Their desserts are a sinful delight. 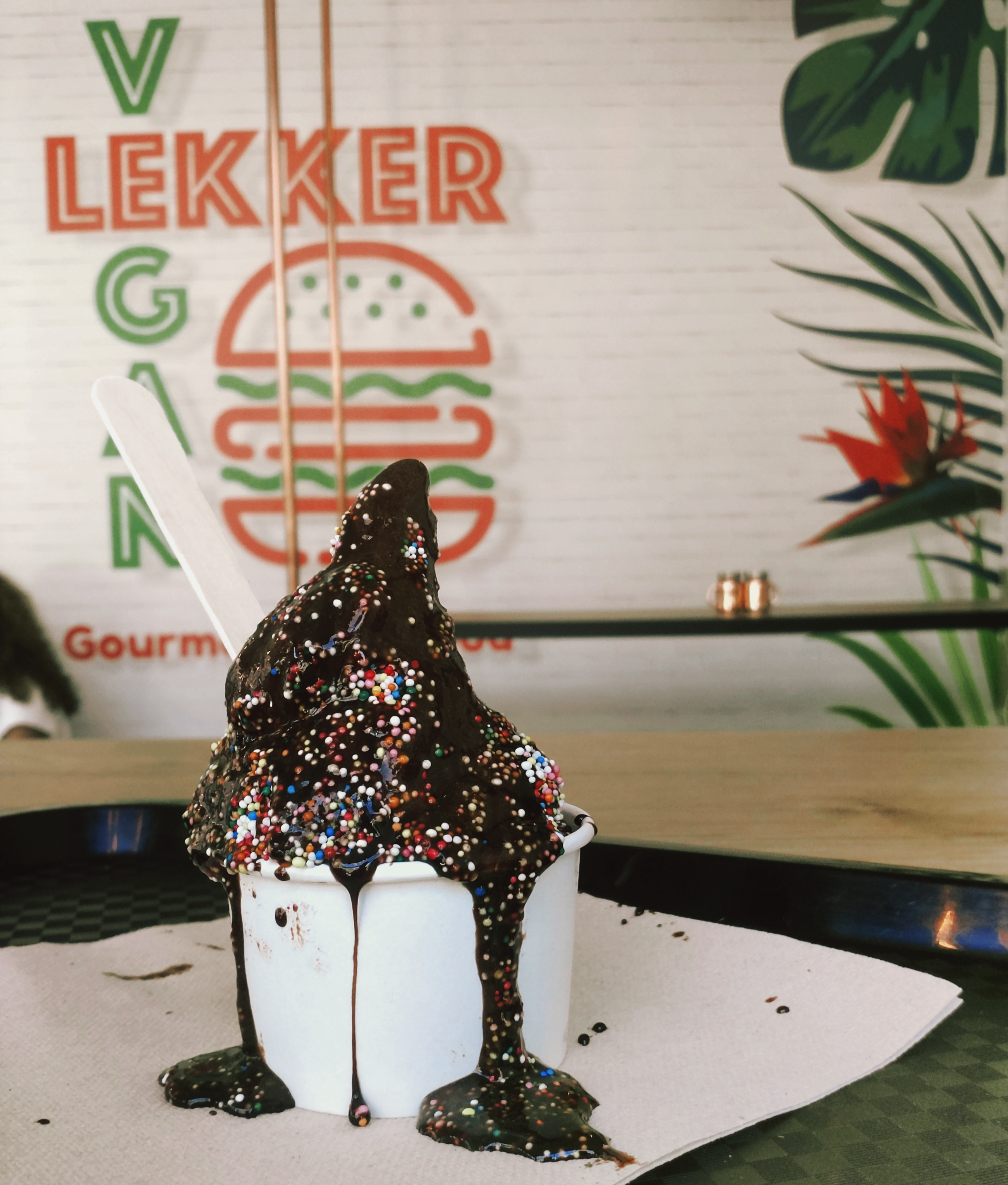 What about the health nuts & vegetarians?

There are other places that can get you your full health hit. Lekker Vegan is your go-to for gourmet JUNK FOOD!

So you get your daily veggies…however deep fried they may be. You know you want it! 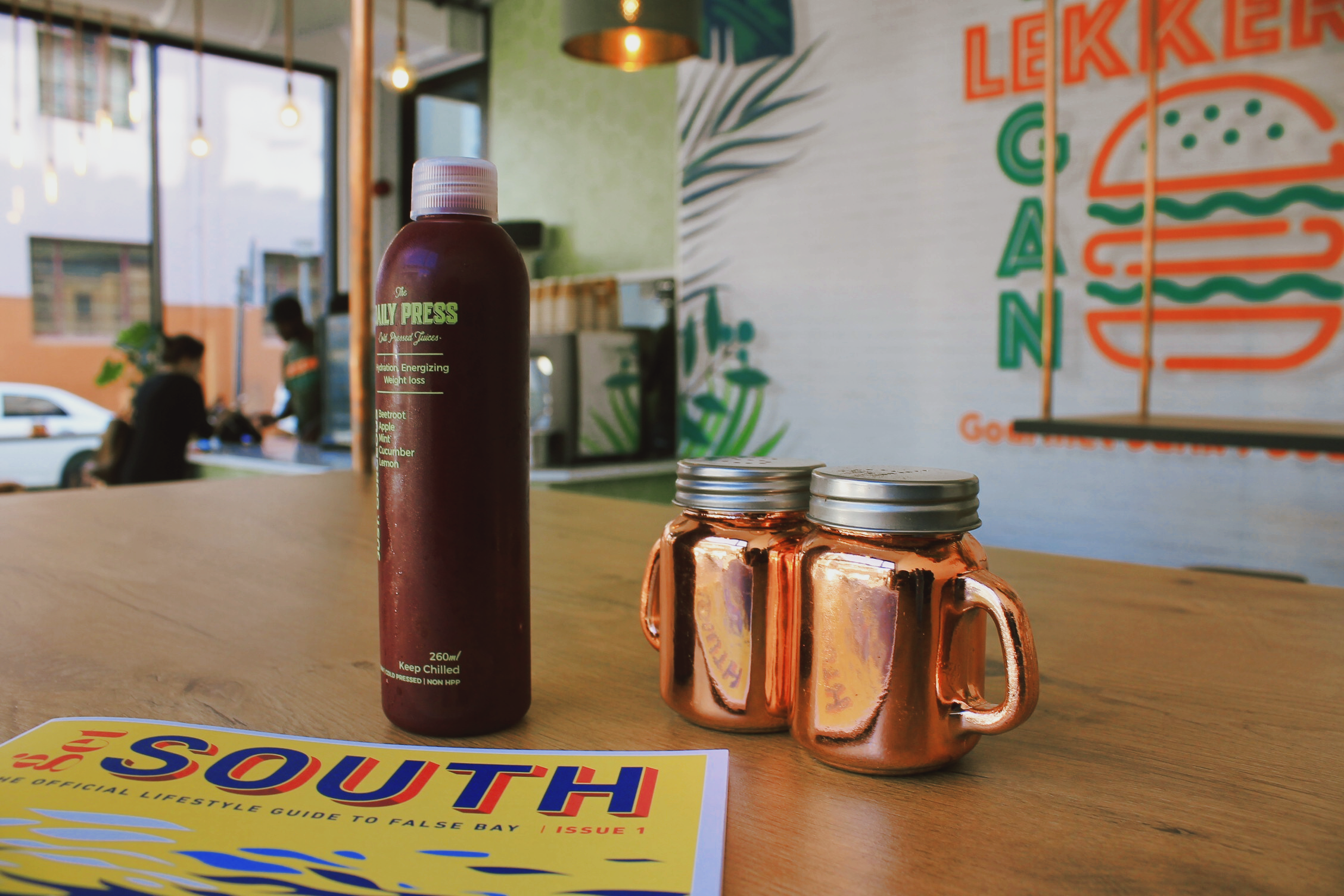 Look out for them as they are coming to you soon, from inner city markets, a food truck during lunch, and even the apps in your hand.