I cook to survive.

I gotta say, I was excited at the prospect of getting to learn atleast some new tricks to cooking easy.

Stuck in a studio, between: stay-at-home mothers, newlyweds, grandmothers, and cooking enthusiasts; I was in the Ginger & Lime food studio feeling like an awkward turtle who only just crossed the adult threshold. It felt almost like people could see right through me, to the Ramen noodles and tomato sauce that became a university staple way back when I was living in res.

Now that I’m deemed a full adult with responsibilities like rent and taxes and stuff, I do think it’s practically a biological imperative to improve my cooking – or make it more nutritious at the very least.

For those not in the know (like I was ignorant of interactive cooking classes, only a week or so ago) Ginger & Lime is an establishment predicated on an interactive food experience, wherein their chefs teach us layman “how to prepare simple, delicious food, with like-minded people who share a passion for food and cooking, and a desire to learn new skills. Or simply come to meet new people and enjoy a great meal”.

So essentially you pay to cook your own food, in someone else’s kitchen, while getting to know new people as you communally cook. All I know is that I had a humbling, and educating experience between networking and eating the array of Asian fusion dishes made.

Let it be known though, that Ginger & Lime’s appeal doesn’t begin in the kitchen. Once you arrive to their Fresnaye location, you’ll find a welcoming fortress of refined grandeur in the middle of bustling cosmopolitan Cape Town. Cooking classes take place in the extended kitchen of a manor-like house with its manicured lawn and towering architecture.

“My kitchen has always been the heart of the home, a place where friends and family gather together and bond over the preparation and eating of fabulous food, and this is in essence what the GINGER & LIME concept is; opening my kitchen to others who are also passionate about food and who enjoy the experience of cooking together.”

Thanks to perfected planning and fine-tuning kitchen dynamics, the team at Ginger & Lime allowed us to get stuck preparing a variety of tasty Asian fusion dishes from scratch  – under their guidance of course. We were also allowed to gather around the kitchen island and watch how to prepare dishes, or sit back with a glass of wine and have a chat with the other guests.

We took advantage of every thing offered.

Known to partner and collaborate with an array of lifestyle brands, Ginger & Lime had its guests sampling local brews by Old Potter’s Brewhouse. The City Slicker ale’s were significantly too yeasty for me to enjoy. I’m not at all a fan of beer, but I thought to give them a change.

Most guests stuck to a trusty glass of grape fruit, with the 2016 Wolftrap Rose being a hit throughout the evening.

What we cooked with?

For the 6 dishes prepared, a coalesced list of the ingredients proceeds as follows:

Be very jealous that we made the following – surprisingly filling – dishes:

Chilled Lemongrass & Coriander Soup – I have literally never had a cold soup, soooooo THAT was a surprise. I wouldn’t have a large bowl full of this soup, but I can appreciate the chilled refreshingly spring taste.

Griddled chicken yakitori with togaroshi spice – I 100% guarantee I will attempt this dish! There’s nothing exceedingly exceptional about it, but I could add it to my weekly cooking menu thanks to the succulent, well-spiced chicken.

The baby spinach/asian spinach salad drizzled with truffle oil, grated Parmesan & topped with onion sprouts, is something I have no choice but to learn to make at home. My mother has fallen in love with growing and using the produce from her own garden; and she’s always looking for new ways to eat her vegetables.

I’m turning 24 years old so OF COURSE I still have the propensity to mainline noodles. The odd crispy Asian cabbage salad with noodles, is the dish to watch me make at home, after a long day at work leaves me no energy to cook elaborately.

They had the Japanese Green beans in sticky sesame seed sauce, and I suddenly developed an affinity for crunchy veggies…must be the sweetness, right?

I’m wholly in love with only 2 dishes from this night folks:

The Thai spiced fish with coconut rice – I thought this would make me sick because ‘Coconut in rice’?! Turns out – ERMAHGERD – It tastes a little like exotic island fun.

Dessert was a marinated and grilled aromatic pineapple with coconut ice cream, but I liked only the ice cream. That whole ‘fruit in everything’ thing, doesn’t work quite well for me.

An 7/10 for the food, and the relaxed but informative teaching style of Denise and her team.

The kitchen was beautiful in its clinical cleanliness; the ingredients were fresh and prepped promptly, and the interactive teaching was timed perfectly to: our intrigued learning, wine revelry and satiable hunger.

The polite hospitality didn’t hurt either.

One would think inviting strangers into ones home constantly, would lead to disgruntlement and resigned weariness, but the Ginger & Lime team are consummate but warm professionals. 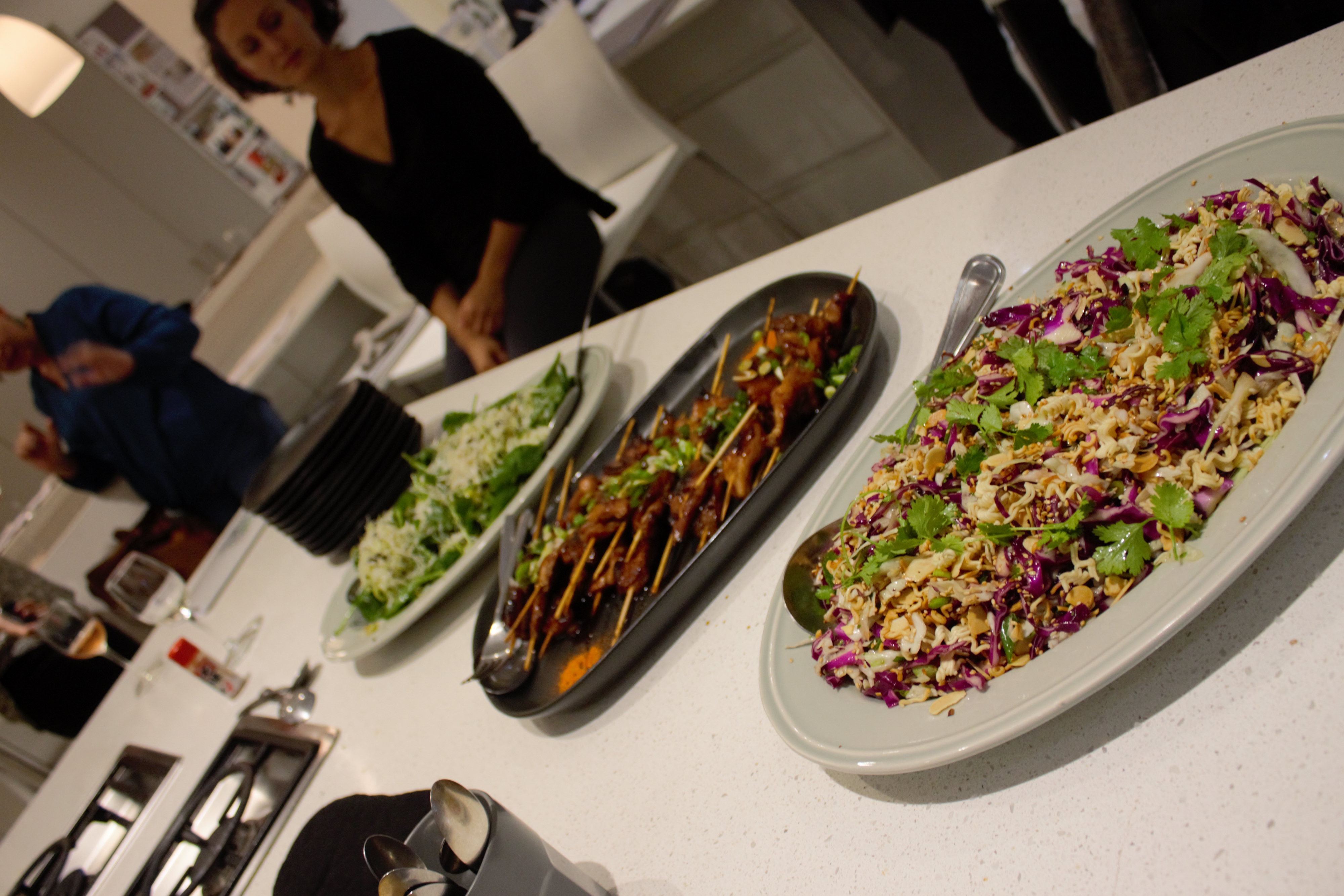